In the world of Trump, irrational arguments are dangerous 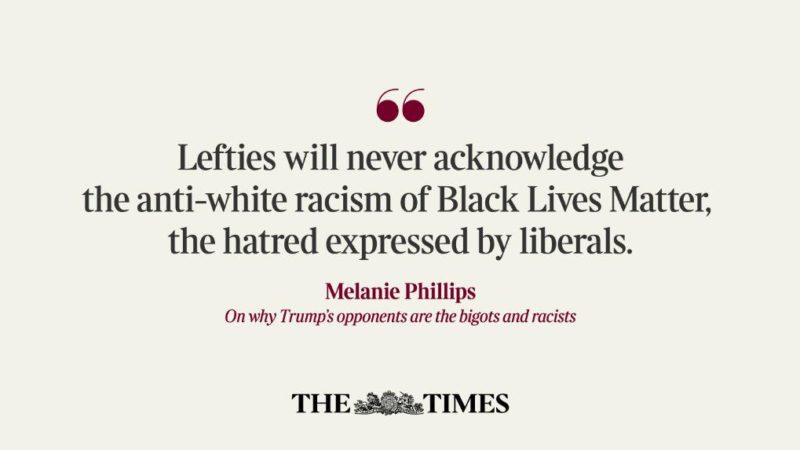 It can’t really be said that the Times is one of the ‘serious’ newspapers when it runs a regular column by Melanie Phillips. The former Guardian hack turned reactionary has been writing muddled garbage for years, and today’s contribution — ‘Trump’s opponents are the bigots and racists’ — is no exception.

For example, she claims that Bannon’s Breitbart News Network, rather than being hate-filled and Islamophobic, simply ‘exposes Islamist violence and intimidation.’

She also shrugs off accusations of anti-Semitism directed at Bannon and, by extension, Trump.

Instead of focusing on these expressions of prejudice and hatred, Phillips argues, we should hone in on the ‘real bigots’: the Black Lives Matter activists who have the temerity to demand that Black Americans not be gunned down in the street.

Her defence of the far right is grotesque, as is her attack on the Americans who — however much she scoffs — are most afraid for their safety following Trump’s victory.

Moreover, her hypocrisy is staggering. As her fellow Times columnist David Aaronovitch wrote in the comments:

“I was trying to imagine my colleague’s reaction had Jeremy Corbyn appointed as his chief of staff someone with Bannon’s record of talking about Jews and others. My suspicion is that she would have been scathing.”

Unfortunately, laughable as Phillips’s rants may seem, in the current context they must be taken seriously.

Her core argument — that the marginalised are the real bullies and racism hurts racists most — is a powerful one in the tospy-turvy world of 2016. In different forms, it’s been parroted by Theresa May, Nigel Farage and, of course, the President-elect himself.

It has been used, and will continue to be used, to discredit the activism of people of colour, LGBT communities, disabled people, leftists and human rights advocates.

And most worryingly, Phillips and others like her are happy to use this argument to fan the flames of social division — with the violent language of culture wars and enemies of the people — and supposedly reputable newspapers will go along with it.

Phillips starts her article by laughing at Americans who feel their safety and well-being is under threat following Trump’s victory. She concludes by warning the same people that ‘this is the culture war’ and that, on both sides of the Atlantic, ‘it will be fought every inch of the way’.

Remind us why liberal fears are unjustified?

See also: Trump shows the far-right is on the rise – but they don’t own the future