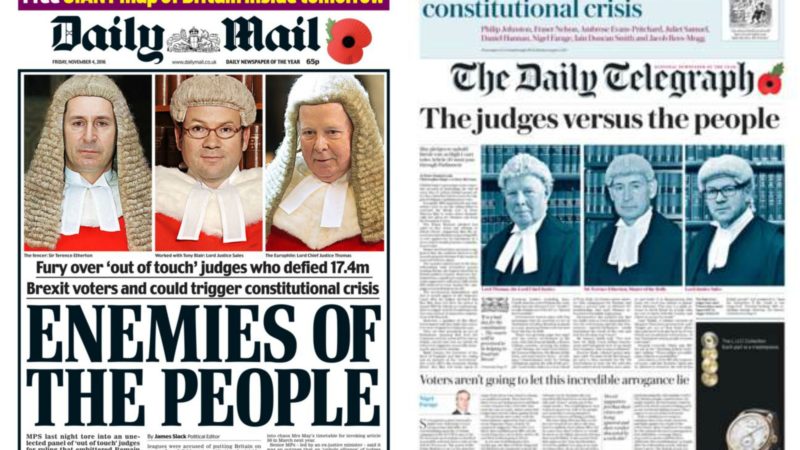 Pointing out that attacks on the judiciary are an early indicator of democratic collapse feels melodramatic, hysterical even.

All the same, today’s front pages demonstrate that Britain is moving — and has already moved — in a very disturbing direction, and that must be taken seriously.

The Mail declares that the three high court judges who ruled that parliament should vote on Article 50 are ‘enemies of the people’, accusing them of having ‘declared war on democracy’.

From the paper which demanded a British sovereign parliament and taking law back into British courts. As ugly as it comes pic.twitter.com/aRNw71uh6M

‘The judges versus the people,’ the Telegraph splashes, simultaneously attempting to soften the messages and fan the flames.

Its front page also features a comment piece from Nigel Farage, in which the UKIP leader claims that ‘rich elites’ are ‘thwarting’ the will of the people — by which he means that citizens are seeking recourse from the courts, and judges are doing their jobs and upholding the law.

The Sun, meanwhile, chooses to attack the citizen claimants who brought the case, rather than the judges themselves. It’s already been reported that claimant Gina Miller has received rape and death threats following the ruling.

Look how the Sun has darkened Gina Miller’s skin compared to the Times pic.twitter.com/Ln8uBMpR68

These efforts to undermine the legitimacy of the judiciary are serious and disturbing. Both the press and the courts are vital components of a functioning democracy and, while they may vehemently disagree, each should respect the other’s role.

These three judges were not acting as rich elites, or activists, or europhiles. They were doing the jobs, for which they are highly qualified, and shouldn’t be vilified as a result. (remember that yesterday the Mail saw fit to highlight that one of the three, Sir Terence Etherton, has the temerity to be ‘openly gay’).

This is also about more than simply these three judges, or these particular claimants. With these acts of public intimidation, the press and the hard right send a warning to anyone else who might question the government’s approach to Brexit — ‘speak out and you will get the same treatment’.

Of course, it’s unlikely that these sentiments herald the onset of fascism in the UK, but they do contribute to a dangerously febrile political atmosphere. It’s not so long ago that an MP was killed in the street by a man who espoused precisely this rhetoric of treachery, seemingly believing that Jo Cox, too, was ‘an enemy of the people.’

With a snap election looking increasingly likely, the national mood is only going to become more heated. Before that happens, the editors of the right-wing press should reflect on the potential consequences of sowing hysteria and division.

17 Responses to “The media has declared war on the judiciary. What now?”