May wants to appeal to 'ordinary' people by attacking everyone else 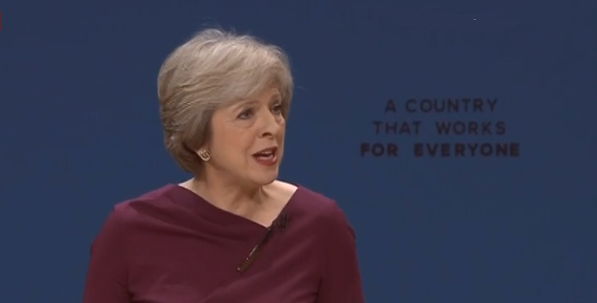 Theresa May’s speech to Conservative Party conference was supposed to showcase her philosophy. And it did.

It showcased a nightmarish new Conservative ideology that cloaks drastic social illiberalism in the language of inclusive economics, panders to one section of the working class in order to marginalise another, and brands anyone who dares to disagree as unpatriotic and sneering.

And it takes the vote to leave the European Union as a justification for extreme, inward-looking and divisive policies, completely disregarding the 16 million people who voted to remain, not to mention all the decent leave voters, who voted for change, not for for xenophobia.

Firstly, we must acknowledge that May is selling false promises even to the people she supposedly cares most about — the white working class, the left-behinds, the just about managing, the ‘ordinary British families’ the Tories are suddenly so concerned about.

Yes, many of these people are angry and that’s why many of them voted for Brexit. But how can May claim to fighting their corner when she was a senior member of the last government, which oversaw the stagnation of wages, the growth of poverty and homelessness, the expansion of the NHS deficit and the depletion of much-needed benefits and public services?

We must be very clear that this speech contained no substantive policy to redress any of that, nor did any other part of the Tory conference. Philip Hammond abandoned the deficit target, but remains committed to the cuts agenda. Jeremy Hunt threatened to kick out foreign doctors, but offered no solution to the yawning deficits that are crippling the NHS.

Amber Rudd promised that jobs would go to British workers instead of migrants, but they are doing nothing to ensure that those jobs are reliable, decently paid and fulfilling. May promises education reform — but still plans to open more grammar schools.

Of course, certain policies are welcome, such as the promise to put employees’ representatives on company boards and to crack down on tax avoidance. But they simply aren’t enough. In the coming years, the poorest communities in Britain are only going to get poorer as the effects of Brexit take hold, and the May government has no plan to tackle that.

However, the truly frightening aspect of this speech was its divisiveness, its aggression towards anyone who doesn’t fit into the prime minister’s defintion of ‘ordinary’.

This includes anyone not born in Britain, despite May’s claim to want ‘a country where it doesn’t matter where you were born.’

It comprises most of the 48 per cent of people who voted to remain in Europe — May seems to have forgotten she was one of them — and all those who envision a more progressive approach to crime, immigration, human rights, healthcare or education.

She insists that these people who ‘find your patriotism distasteful, your concerns about immigration parochial, your views about crime illiberal, your attachment to your job security inconvenient,’ refusing to accept that progressives and internationalists are ever acting in good faith.

Indeed, May reserved particular venom for ‘those activist, left-wing human rights lawyers [who] harangue and harass the bravest of the brave’. By which she means lawyers who believe that it’s wrong to torture, to illegally detain, to kill unlawfully.

Those who insist that any British soldier who does commit abuses is not patriotic, is not ‘the bravest of the brave’ but is a disgrace to his or her country.

That’s not just an attack on the affluent who travel the world for pleasure, but on the stateless refugees currently seeking safety in Europe, and on the millions of immigrants and descendants of immigrants who live in Britain but retain their ties to somewhere else. Who believe that embracing a new home doesn’t have to mean abandoning your old one, and are proud to be British-Indian, or British-Caribbean, or British-European.

For millions of people in this country, patriotism means being proud of Britain precisely because it’s colourful, diverse, progressive, committed to human rights and to international solidarity.

With this speech, the prime minister sneered at their patriotism. And she should be ashamed of it.