Workers are fighting for £15 an hour and union recognition, among other demands. 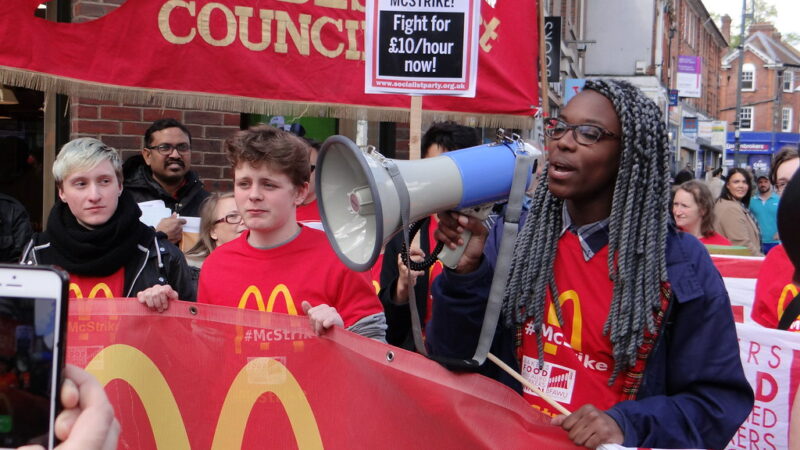 McDonald’s workers are set to go on strike next month, in the largest UK walkout the company has faced yet.

The Bakers Food and Allied Workers’ Union (BFAWU) is notifying six London McDonald’s stores that its members will go on strike on 12 November, as part of an international day of action for fast food workers’ rights.

The McDonald’s workers are calling for a ‘New Deal’ for McDonald’s workers including £15 an hour pay, an end to lower youth pay rates, the choice of guaranteed hours of up to 40 hours a week, notice of shifts four weeks in advance, and trade union recognition.

Melissa Evans, 32, a mum who works at McDonald’s in Wandsworth Town said:

“I need £15 an hour so I can show my son that poverty is not the only option. Me and my colleagues are coming together in a union to show the world that McDonald’s workers deserve the same level of respect as everyone else.

“We are coming together to tackle poverty pay, insecurity of hours and lack of respect which has gone on at McDonald’s for too long. We are going on strike on 12 November 2019 as workers around the world take action to hold this global multinational to account for the way that it treats its workers.

“We are tired of being exploited, but together we are powerful. We will win a new deal for McDonald’s workers.”

The strike will take place on a global day of action for fast food workers called by the International Union of Food (IUF) workers, which will see fast food workers take to the streets around the world, including France, Belgium, Brazil, Chile, New Zealand, and many others.

In the UK, War on Want and the TUC are organising days of action by across the UK to demonstrate public support for the McDonald’s workers.

McDonald’s workers in the BFAWU have previously gone on strike three times: starting in September 2017 with two stores, and with two subsequent strikes last year.

This strike will be the largest to date of McDonald’s workers, with more stores going out on strike than ever before.

Lewis Baker, a ‘McStriker’ from Crayford will go on strike for the fourth time. He said:

“McDonald’s can afford to pay us £15 an hour. It’s a reasonable request for a corporation that earns millions every day. Instead of listening to what we’ve been demanding, McDonald’s has tried to dismiss us, saying we were few.

“Yet McDonald’s workers everywhere face the same issues of poverty pay, insecure hours and a lack of basic respect. We are growing bigger with every strike. It’s time for McDonald’s to give its workers a New Deal.”

“McDonald’s workers are leading the way – and their bravery is a lesson to us all. Because they are winning. They have won a 10-year record pay rise. They have won more guaranteed hours. They have challenged and defeated bullying and harassment by both managers and customers. And they have won changes to make life more bearable at work.

“My message to every worker is this: if you want to improve your workplace and your life, form a union. Participate. Stand together and win.”

The action is part of a growing movement of ‘precarious’ workers who are getting organised. LFF was among the first cover the McStrike movement here.

“We are extremely disappointed that a very small number of our people in just a handful of our restaurants are considering industrial action. We believe only 13 people are involved across six restaurants, which is a tiny proportion of our 130,000 workforce. Their potential actions do not represent our people. We are committed to investing in our workforce, listening to and doing what is right by them.

“While it is unfortunate this may be taking place, it is encouraging that there has been a steady decrease in the already small numbers of our people previously balloted. In October 2018, when activity was last planned, ultimately none of our people actually took action [Ed: A union spokesperson described this as a ‘lie’, saying McDonald’s workers took action that day”]…

“The BFAWU is calling for 40 hour guaranteed contracts, which is something we already offer – but has been chosen by very few of our people. With all given the choice, around 90% of our employees have chosen to remain on flexible contracts, valuing the ability to work their shifts around their lives.

“We remain committed to our people and value the contribution they make to our organisation, and would like to reassure them, and our customers, that the six restaurants will remain open if industrial action takes place.”

Responding, a Bakers’ union (BFAWU) speaker said the small number McDonald’s referred to only reflects the number of members at time of balloting:

“[That] doesn’t reflect the numbers who will go on strike. Anyone can join up after the strike is called and join the action.”

“Each time McDonald’s have tried to downplay the numbers involved.”

The union spokesperson added: “McDonald’s claim they offer all staff guaranteed hours. Many workers have never been offered that: you have to qualify for it, apply, and it’s still at the manager’s discretion. It doesn’t stand up to scrutiny.

“They are using it a smokescreen to cover up for the fact workers don’t have the hours they need to put food on the table.”

See also: Why I’m fighting back against sexual harassment at McDonald’s and How the Sun tried to smear the McStrike movement