My union has helped me say sexual harassment is not OK. 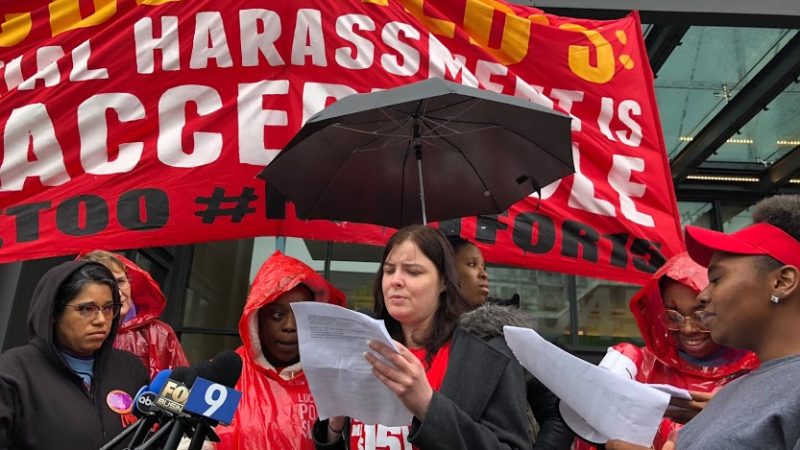 My name is Christine Hayes, I have worked at McDonald’s for over three years.

Yesterday, I protested outside McDonald’s HQ in Chicago and stood with other McDonald’s workers to call for an end to the culture of sexual harassment in their stores.

I started to work at McDonald’s when I’d just moved to London. Like everybody I needed a job to pay for the roof over my head, to put food in my mouth and have enough money to survive.

If I knew then, what I know now, about what I was walking into, I would never have taken that job.

Whilst working there, I suffered sexual harassment. It makes you feel extremely uncomfortable. You feel degraded. I can’t put into words how badly I was treated.

Managers did not enforce proper boundaries. There was no training on sexual harassment and proper procedures were not followed. I was fobbed off.

Sexual harassment can make you feel really alone. It’s really difficult to handle a situation like that. You want to go home and just ignore it. Pretend it didn’t happen. But it doesn’t go away. You still have to go to work every single day and face it. You don’t know what to do or say.

Now, with the help of my union,  I am standing up to say that what happened is not okay. It’s not been the easiest thing in the world to do. It’s really difficult.

It feels hard, but once you do it and you realise the impact it has on other people, it makes you feel great. I’ve decided that I’m not going to be degraded any more.

They’re trying to carry on as if it’s normal. But it’s not normal. It is not okay. It can cost you your mental health. So we need to stand up and start saying NO. We need to make sure no one ever has to feel like that anymore.

It has been empowering to meet with other McDonald’s workers who have told me their stories, as I’ve explained my story to them.

When we come together we are powerful. We can tell our stories out loud and together we can change the story of sexual harassment at McDonalds.

We are coming together in a union. A union is the foundation we need to be able to change the environment we work in together.

We shouldn’t have to try and change this alone. Sexual harassment hurts people. No one should have to face it when they go into work to earn what they need to live.

McDonald’s makes billions in profit from our hard work, but you can’t put a price on our human rights.

The time has come for McDonald’s to stop ignoring this problem and start making the changes needed.

McDonald’s must realise that us workers are not going to take this anymore. We are no longer facing this alone.

All of us are going to stand together with our union and sort this problem out, once and for all.