"Now we’ve started, it will just snowball," one of the key strikers tells Left Foot Forward. 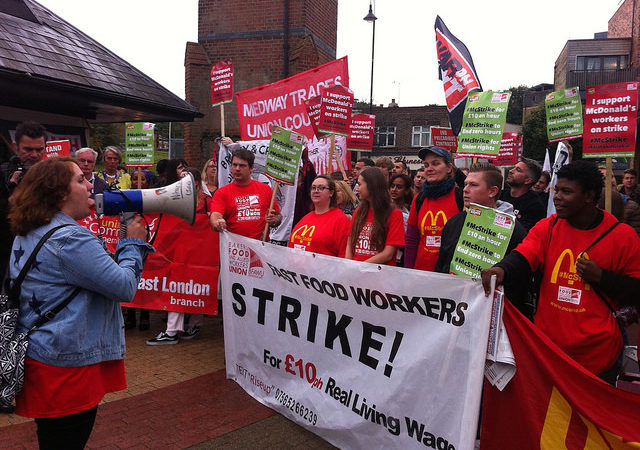 McDonald’s workers are set to go on strike again in the new year – and this time it will be bigger than before.

Back in September, 40 workers at two stores took part in the UK’s first ever McDonald’s strike, over drastic cuts to employee hours and alleged bullying in the workplace – bullying the workers viewed as punishment for joining bakers’ union BFAWU.

96% of those balloted voted in favour of action, with workers demanding a wage of £10 per hour and union recognition.

But while some problems appear have got better since the action in the two stores affected, McDonald’s workers across the country have been inspired.

We spoke to Lewis Baker, a member of the Bakers Food & Allied Workers Union who took part in the Crayford McDonald’s strike in September, about the impact of September’s action:

“The amount of support we had was amazing. Loads of other groups came out to support…There were over 100 on the picket line.

“In the run up to the strike the company were treating it as a joke – on the day they got people in from other stores to cover it.”

But it was bullying which first drove the action:

“A new manager came back from holiday and started bullying a lot of staff. In our store we had 12 grievances against this manager – and they had ignored them.

“But when we went to ballot they were rushing around to answer as many [grievances] as possible.

“At that time it was too late: people had had enough.”

Baker says some of the bullying has died down since the strike. But the real impact is the ‘threat of a good example’:

“We have had other people contacting the union – I think it will really take off.

“Before, the strike managers treated it as a joke. Now they take us very seriously.”

Neither Baker nor the other members had done any training or were union reps before the action. But now they have an active branch – and with good reason. “There’s a lot of things which need changing,” he said.

Baker tells Left Foot Forward there are at least half a dozen other stores which are seriously looking at unionisation and taking part in strikes in the new year, across the UK.

“McDonalds still didn’t think…workers deserve a response or a reply. Their position is that they don’t talk to trade unions. But we’re going to take the fight to them.”

McDonald’s may well be forced to the negotiation table when these strikes spread in the new year.

See also: McDonald’s workers won in New Zealand and they can win here — here’s how