Two McDonald's strikers respond to an attack piece by the Sun - and say the campaign for decent conditions is growing by the day. 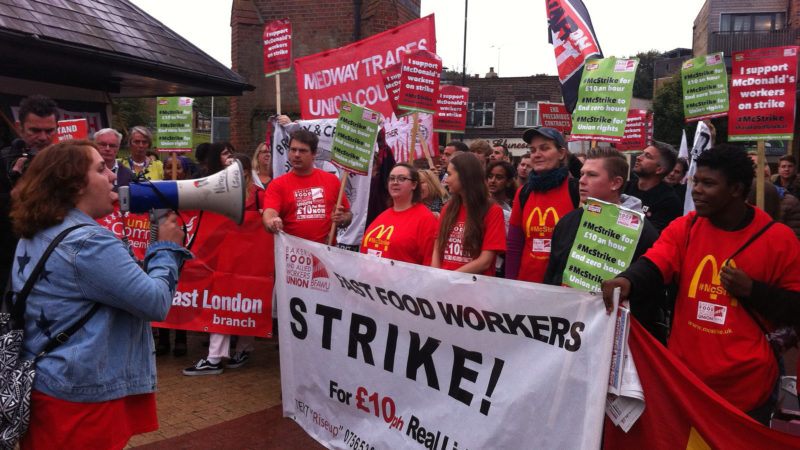 The Sun newspaper has been up to its old tricks: yesterday it joined with McDonald’s to attack our union and the McStrike, as well as workers like me who are standing up for our rights.

We didn’t respond to their enquiries because we are boycotting the Sun – which has built its reputation on attacking working people and bullying the most vulnerable in our society.

From their disgusting behaviour blaming Liverpool fans for the tragedy at Hillsborough, to hacking phones and scapegoating migrants for every conceivable ill, the Sun’s agenda is diametrically opposed to what we stand for. As a trade union that stands alongside the oppressed in our society, it’s no surprise that they turned their sights on us.

The article tries to paint the McStrike as  ‘Off-the-menu’ – when in reality the McStrike is growing with five stores now ready for strike action, three new stores joining the two that went out on strike in September.

The Sun claims the McStrike is ‘a flop’ – when McDonald’s has already responded to the McStrike by giving workers the largest pay rise in a decade and making moves around zero-hour contracts.

With results like these it’s no wonder McDonald’s workers from across the country are getting in touch and joining in.

The paper shows such disdain for McDonald’s workers like me that it finds it hard to believe we are the driving force behind the McStrike, claiming we are manipulated by politicians.

We’ve been grateful for the support that Jeremy Corbyn and John McDonnell have given our campaign, as well as that of other politicians like Jean Lambert MEP of the Green Party, and Chris Stevens from the SNP. But the McStrike is about McDonald’s workers getting together ourselves to challenge the exploitation we face at work.

We know that it is our actions that will drive change. We know that when we demand a living wage of £10 an hour, we’re taking on the real benefit cheat: McDonald’s. Staff are forced to rely on benefits to top up poverty wages whilst McDonald’s dodges paying its fair share of tax.

The Sun, like any bully, chooses to pick on the already vulnerable instead of focusing its anger at the powerful. We, the McStrikers, refuse to do the same.

And the article repeats false allegations of McStrikers intimidating their colleagues: these allegations are used to try and scare workers off from joining the union. They are a tried and tested union-busting tactic. It won’t work. We’ve faced bullies before – there’s plenty of them working as managers in McDonald’s stores up and down the country. And this time, we’re standing up to them.

That’s what this article is really about: we are being attacked because we are winning. We know that when we get together, we are powerful. We won’t let them win.

​Ali Waqar and Lauren McCourt are McStrikers from Manchester & members of the Bakers, Food and Allied Workers Union.

One Response to “Super-sized lies: How the Sun tried and failed to smear the #McStrike”