Strikes have been called off after a historic win for workers at The Doctors Laboratory. 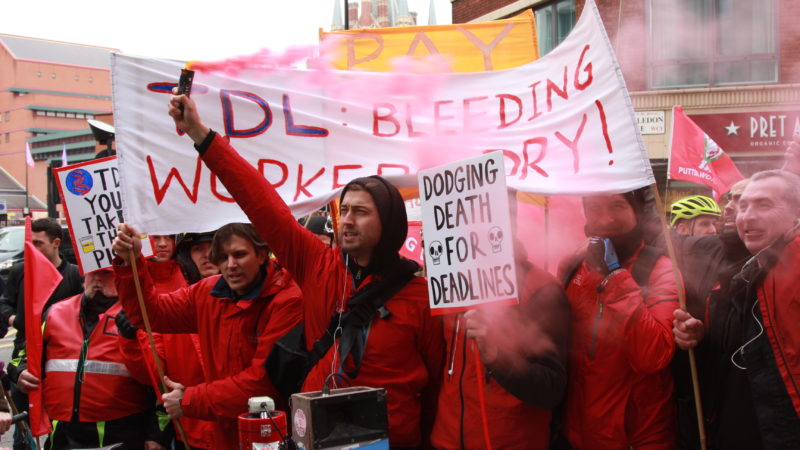 The Independent Workers’ Union of Great Britain (IWGB) has reached a historic pay deal with NHS contractor The Doctors Laboratory (TDL) after a long-running battle with the pathology firm.

Self-employed couriers on ‘worker’ status who deliver emergency blood and pathology samples for NHS and private hospitals will now have the choice to move from being paid per delivery to being paid for every hour worked.

Workers – who have until now been paid per delivery – have secured hourly pay and improved conditions after campaigning and strike action. Around 120 people are estimated to be affected by the deal.

The IWGB say workers at the firm had previously subjected its couriers to years of pay cuts.

Those on employee contracts will also have the option to have their vehicles and equipment provided by the company, as well as a fuel card to cover petrol costs.

As a result, IWGB members at TDL voted in favour of the offer and have called off the strikes scheduled for 25 and 26 June.

The deal comes after the IWGB launched a campaign against the company in October of last year, which culminated in two days of strike action in May.

Following the strikes TDL returned to the negotiating table and agreed to offer the couriers improved conditions, including the option of being paid per hour worked, rather than per delivery, reducing the uncertainty around earnings for many couriers.

Couriers on employee contracts will have a pushbike, motorbike or van provided by the company and a fuel card to cover petrol expenses.

Night work will also be paid at a higher rate, and workers have received a guarantee that their hours won’t be cut when transferring to the new contracts.

The company have also committed to review the deal in six months time and annual pay reviews.

“After a gruelling campaign we have managed to drag TDL to the negotiating table and agree on a deal that gives us some security when it comes to our earnings.

“Through our organising effort of the last two years, we have also managed to transform the workplace and stop the chronic bullying that was previously so common.

“This victory shows that by staying united and campaigning together it is possible to reverse the race to the bottom inherent in the business models of so many so-called ‘gig economy’ employers.”

The IWGB is also representing 45 TDL couriers as part of a £1 million holiday pay claim being heard next week at the Central London Employment Tribunal.

Until recently, TDL had reportedly denied its couriers basic employment rights, including paid holidays, by wrongfully classifying them as independent contractors.

Following the launch of legal action by the IWGB in 2017, the company reclassified all its couriers as workers or employees. However TDL has never compensated the couriers for the years it denied them employment rights.

The development follows the IWGB winning the right to collectively bargain on behalf of TDL couriers last year, the first time in UK history that this had been done with a so-called “gig economy” employer, as reported by LFF.

The IWGB has been behind a series of high-profile strikes among low-paid workers. Last year, University of London central administration announced it would end outsourcing and bring its facilities management contracts in-house, in a major concession to the union’s ‘Back in-house‘ campaign.

The union have also captured headlines by taking firms like Uber and Deliveroo to court over employment rights.

“We were pleased the IWGB agreed to return to the table earlier this month. Discussions were productive and we were able to renegotiate TDL’s original pay offer and reach an agreement that works for both parties.

“Our couriers are valued members of our workforce and we look forward to open communication and positive working relationships in the future.”