The outgoing UKIP leader has embraced the world's most famous racist. Don't let anyone forget it. 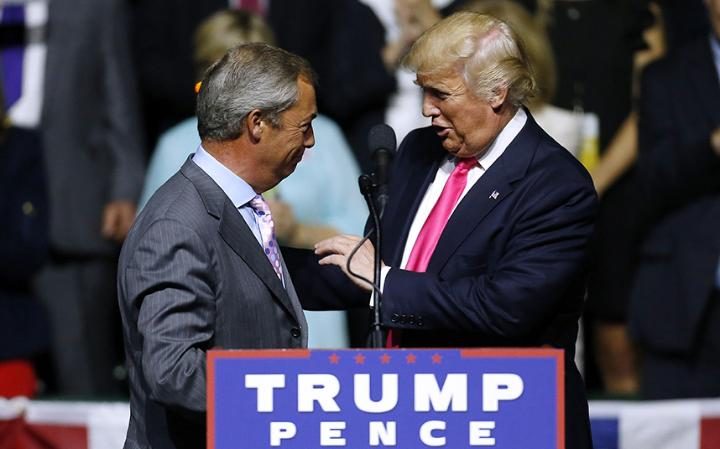 Nigel Farage’s pep talk at a Donald Trump rally ought to put to rest the argument about whether UKIP is a racist party.

Is there still an argument? Certainly. UKIP picked up 12.6 per cent of the national vote in last year’s general election. That’s 3,881,099 people who crossed the UKIP box, presumably not all of them believing they were voting for a racist party.

This is despite a mountain of evidence to the contrary, from UKIP’s policies to the behaviour of its candidates – not least Farage himself. (When he isn’t bleating about Romanian criminals and Muslim rapists he warns African migrants with HIV are mooching off the NHS.)

So of course he finds a natural ally in the Republican candidate for US president.

At a campaign rally in Jackson, Mississippi, Farage embraced the orange demagogue, and called for a ‘people’s army’ of canvassers to rise up and repeat the success of Brexit.

The outgoing UKIP leader told 15,000 Trumpkins to ignore experts, polls, and the media, ‘put your walking boots on’ and deliver Trump into the White House. The Donald stood a few feet away, beaming and applauding his man.

Farage tried to tap-dance around an actual endorsement, joking that he didn’t want to meddle in US politics.

But it stands to reason that if you fly to Mississippi for a Trump rally, advise his supporters on how to win, and say ‘I wouldn’t vote for Clinton if you paid me’, you’re not a neutral observer.

Let’s take a moment to recall who Farage has just flown across the world to shake hands with.

Sticking just to the racism:

That’s the short version. And the same could be said of UKIP’s claims not to be sexist, elitist, isolationist and so on.

But the next time someone says UKIP is not racist, (usually conflating people who vote UKIP with the party itself), be sure to remind them who its top politician backed for the most powerful office in the world.

See: Has UKIP run a hateful referendum campaign? These 11 comments would suggest so