From Islamophobia to misogyny to bashing refugees, Nigel Farage should be ashamed of his impact on this debate 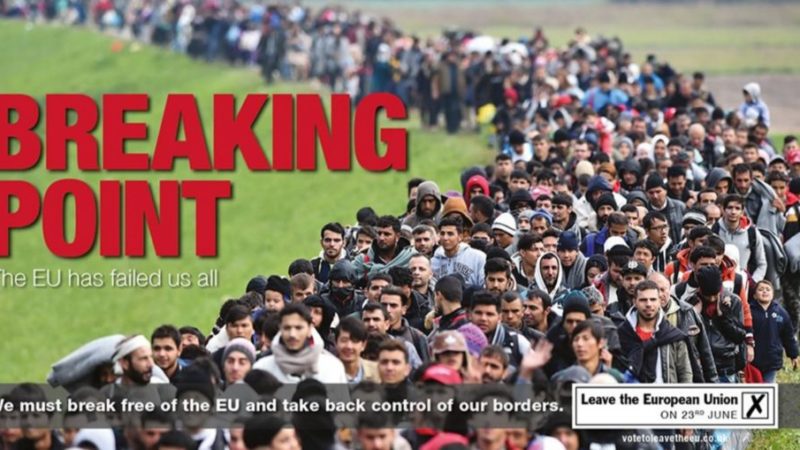 During his final speech and press conference of the referendum campaign, Nigel Farage defended the tone and nature of UKIP’s campaign.

He claims that he has only been criticised by his opponents because ‘if you take on the establishment and challenge their assertions, that is what happens to you.’

Unfortunately, these 11 statements that he and his colleagues have made in the last three months suggest that there’s a bit more to it than that:

1. Starting with the most obvious, Farage launched a poster last Thursday, showing Syrian refugees crossing the border between Croatia and Slovenia under the headline ‘BREAKING POINT’.

It was heavily criticised as racist, even before Jo Cox was attacked and killed later in the day. Although Farage says he regrets the timing, regarding the ad itself he says:

“I can’t apologise for the truth.”

2. Within hours of bombs going off in Brussels airport and Malenbeek on 22 March, UKIP’s defence spokesman Mike Hookem made an opportunistic statement, claiming the tragedy proved UKIP’s point about free movement. He said:

“This horrific act of terrorism shows that Schengen free movement and lax border controls are a threat to our security. The head of Europol said in February that 5,000 jihadists are at large in the EU having slipped in from Syria.

There are 94 returned jihadists currently living in Molenbeek, Brussels. This fact alone should alert people to the fact that open borders are putting the lives of European citizens at risk.”

3. Farage also used the Brussels attacks to advocate Brexit. He said the attacks made him ‘depressed for the future’ and retweeted Allison Pearson’s description of Brussels as ‘the jihadist capital of Europe’.

Brussels, de facto capital of the EU, is also the jihadist capital of Europe. And the Remainers dare to say we’re safer in the EU! #Brexit

4. Continuing on the terrorism theme, both Hookem and Farage have also quoted the head of Europol as saying that 3,000-5,000 jihadists had entered the Schengen zone in the last 15 months. Unfortunately for Farage, moments after he made the claim in the Mirror’s live debate, the head of Europol himself contradicted it.

That’s me he’s quoting then! And I never said that. Figure likely to be much less. @StrongerIn @UKIP https://t.co/edguLjP8RH

“Frankly if we are prepared to accept. . .unlimited numbers of young males, from countries and cultures where women are at best second-class citizens then frankly, what do you expect?”

6. And just in case the Islamophobia in Farage’s comments wasn’t clear enough, UKIP MEP Jane Collins decided to get in on the action.

Muslim men have been carrying out sex attacks in the UK for over 20 years and that threat continues with migration from Muslim countries.

7. During a discussion on Victoria Derbyshire on 6 June, Collins also retweeted a comment that described a Muslim in traditional garb as ‘a man in a dress’, and accused him of being a Remain campaign plant.

Does anyone know this man? A person from the ‘undecided’ camp knew he was called Mohammed without him saying so. pic.twitter.com/vCGXiXPfa1

8. When Boris Johnson compared the goals of the EU to those of Hitler, some in UKIP feared they were being out-scaremongered. So UKIP MEP Gerard Batten decided to ‘prove’ an even closer link — alleging that, based on three words of translation, the EU looks basically the same way it would under the Nazis.

“In 1942 when the German’s still thought they were going to win the war they produced a report entitled the Europaische Wirtschafts Gemeinschaft – which translates as the European Economic Community.”

9. As Buzzfeed reported, Batten also wrote a leaflet suggesting that:

“The EU intends. . .to import millions more people from Africa and beyond”

Does anyone want to treated by a Foreign doctor with a poor grasp of English language? (sic)

11. Coburn, of course, is not only racist, but misogynistic and homophobic too. Having previously been slammed for referring to Scottish Tory leader Ruth Davidson as a ‘fat lesbian’, during last night’s debate he retweeted this:

And so back to Farage. In this morning’s speech he took credit for UKIP having ‘changed the political agenda’ and ‘the political language’.

While that is probably true, perhaps the UKIP leader should consider whether a more hateful, more divided, more prejudiced and aggressive political language is really something to be proud of.

4 Responses to “Has UKIP run a hateful referendum campaign? These 11 comments would suggest so”