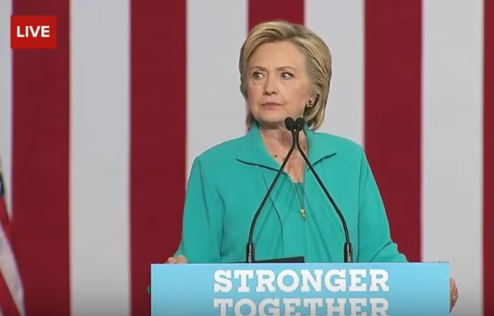 ‘I wouldn’t vote for Clinton if you paid me,’ Nigel Farage told a Donald Trump rally on Wednesday.

He intended it as a insult, but Hillary has repurposed the denouncement and worn it as a badge of honour.

In a speech about Trump’s connections with the far right, the Democratic nominee briefly and devastatingly turned her fire on the outgoing UKIP leader:

“Just yesterday, one of Britain’s most prominent right-wing leaders, Nigel Farage, who stoked anti-immigrant sentiments to win the referendum on leaving the European Union, campaigned with Donald Trump in Mississippi.

“Farage has called for a ban on the children of legal immigrants from public schools and health services, has said women are, and I quote, “worth less” than men, and supports scrapping laws that prevent employers from discriminating based on race ― that’s who Trump wants by his side.”

Yesterday, we wrote that Farage’s appearance with Trump should put to bed his claim that UKIP isn’t actually a racist party.

It’s interesting that to progressive Americans the inverse is true — associating with Farage throws Trump’s racism into even sharper relief.

Farage may like to think of himself as a skilful statesman, but in his brief clash with Clinton he has been outclassed.

If you Kippers play with fire you’re going to get burned.