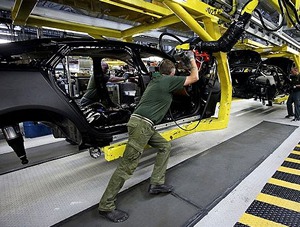 This week has seen the word ‘reshoring’ enter the mainstream.

In Unite’s strategy document ‘Made in Britain’, published in November last year, we set out the case to reshore under the heading ‘Bringing Back The Supply Chain’.

In the document we said:

“Unite believes that previously, the ‘herd mentality’ took valuable manufacturing investment and jobs to low cost countries. Where one company went – the rest began to follow or thought they had to, to remain competitive. One of the real challenges that UK manufacturing workers have faced has been the outsourcing of jobs to low wage economies”.

It seems that moving production to low cost countries – costing thousands of skilled manufacturing jobs – may be going into reverse.

Trade unions warned of the consequences of the rush to shift production to emerging countries ten years ago. We warned that moving work to economic areas with low wages and weak employment rights was nothing more than a ‘race to the bottom’ that would damage the UK’s manufacturing base.

Costs in the emerging economies are now rising – as predicted – but there are other factors leading companies to return to the UK: shorter lead times and shorter supply chains, ease of communications (many companies tell us it easier to put things right when there are problems with UK companies). But top of the list is the fact that the UK has a skilled workforce, with expertise at producing top quality goods.

The employers organization the EEF has produced a report on reshoring this week. Commenting in the report, EEF’s chief executive Terry Scuoler said it was “highly encouraging to see more reshoring”.

“While it will always be two-way traffic, the need to be closer to customers, to have ever greater control of quality and the continued erosion of low labour costs in some competitor countries mean that in many cases it makes increasingly sound business sense,” he added.

“Among the top reasons for reshoring” said  Scuoler, “is greater certainty around shorter delivery times”.

A third of companies said this was the reason they are bringing back work to the UK. Quality was another reason in 50 per cent of the cases of reshoring among SME’s.

Unite is also supporting initiatives such as the Automotive Investment Organisation led by UK Trade & Investment (UKTI) and former Ford CEO Joe Greenwell, who are developing a strategy to “repatriate the automotive supply chain and build on the opportunities identified in the UK”.

The Automotive Council says that that there was an additional £3 billion of new business that could be won by UK suppliers and overseas companies looking to set up or expand manufacturing facilities in the UK.

The EEF’s report also says that the jobs created in the UK by reshoring “are likely to be highly skilled, technical and well paid”.

If we are going to re-balance the economy in favour of manufacturing, the move to bring more work back to the UK has to be focused widely. Unite has argued that our aerospace and engineering sectors should now be seen as sectors where we can work to bring back the supply chain – after all as the EEF report says the jobs created in the UK by reshoring “are likely to be highly skilled, technical and well paid”.

One Response to “Manufacturing jobs may be coming back to Britain”