The coalition is still failing to get banks lending to businesses, new figures from the British Bankers' Association (BBA) reveal, despite the introduction of the government's Funding for Lending Scheme (FLS), which gives cheap funding to banks on the basis that they lend money to households and businesses. 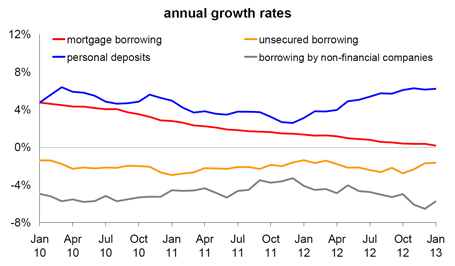 The coalition is still failing to get banks lending to businesses, new figures from the British Bankers’ Association (BBA) reveal.

In total, lending to businesses dropped 5.7% in the year to January.

That figures come despite the introduction of the government and the bank of England’s Funding for Lending Scheme (FLS), which came in last August to provide cheap funding to banks on the basis that they lend money to households and businesses.

Net mortgage borrowing from the banks also grew by just 0.2% in the year to January, the slowest level of growth since BBA records began in 1997 – also significantly down on rates of 6% growth seen during the financial crisis of 2008.

Last month MPs criticised the FLS for having a “bias” towards mortgages rather than businesses, and expressed concern about reports that businesses were not benefiting from the scheme.

The Federation of Small Businesses also criticised the FLS in December, saying the scheme “does not increase access to credit” and that businesses looking for finance for the first time were now “more likely to be refused“.

“While general economic growth stalls, low consumer and business confidence generates a natural tendency to restrain borrowing appetite, repay borrowing where possible and to build up cash and savings as a buffer,” he said.

As Left Foot Forward recently noted, growth in the UK economy has stalled since around the third quarter of 2010 – coincidentally, at about the time George Osborne set out the coalition’s spending plans (20th October 2010).