The 1900 Olympics were the first of their kind to allow women to compete, and it was a British woman who came away as the first ever female Olympic champion.

.
In celebration of London 2012, Left Foot Forward will be running a series of profile features on Olympic heroines past and present, and potential female stars of the future. London 2012 is the first year that all teams have a female competitor yet women are still severely under-represented in sport, especially when it comes to coverage and sponsorship. The success of female athletes in this year’s Olympics needs to trigger cultural change.

The 1900 Paris Olympics were the first of their kind to allow women to compete – and it was a British woman, Charlotte Cooper, who came away as the first ever female Olympic champion. 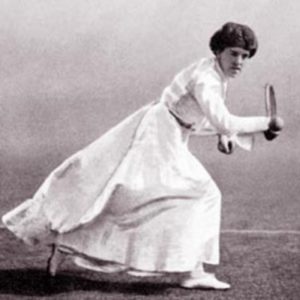 A far cry from the Williams sisters’ tiny skirts, Cooper had the added pressure of playing in a traditional Victorian ankle-length dress.

Cooper was also five times Wimbledon Ladies Singles champion between 1985 and 1908. She also lost her hearing at the age of 26, three years before her Olympic success.

Cooper would have grown up during the Women’s Suffrage movement, which started in 1872. Votes for women were not granted until 1918, which means Cooper spent the early 1900s cementing her place in sporting history yet still could not vote in a general election.

Regardless of her titles, Charlotte would recall a match in 1907 against the US tennis player May Sutton as her most memorable:

“I had heard a great deal about Miss May Sutton… beating everybody without the loss of a set. I had also heard she was a giant of strength, and that the harder one hit the more she liked it.

“The first time I met her was at Liverpool in 1907 – I did not play the previous season. I was determined to introduce unfamiliar tactics, giving her short balls in order to entice her up to the net. The result was that many of her terrific drives went out, and I think this was primarily the reason why I was the first lady in England to take a set from her.

“I recollect her telling me, after the match was over, that my game was very different to any other she had ever played, and that she was not anxious to meet me again–remarks I took as a great compliment.”

Charlotte married Alfred Sterry in January 1901 and they had two children, Rex and Gwyneth. Following her marriage, Charlotte played under her married name and was the second of only four women in history to win the Wimbledon Ladies’ Singles after becoming a mother.

At 37 years and 296 days old, Charlotte Cooper Sterry is still, to this day, the oldest Wimbledon Ladies’ singles champion.

Charlotte passed away in 1966 at the age of 96. It is claimed that neither her medals nor Wimbledon trophies could be found after her death, and her son apparently said it was in her nature to ‘give them away to the gardener’.

It is unbelievable to think Charlotte Cooper Sterry was able to make history on the tennis court yet couldn’t do something as simple as vote. However, it is likely her success on the Olympic tennis courts in Paris had a great impact on society’s attitude towards the equality of women, paving the way for equal voting rights in 1918.