An Essex newspaper has come in for severe criticism for an "article" on its website which reads almost word-for-word like a BNP press release. 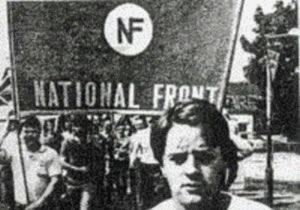 An Essex newspaper has come in for severe criticism for an “article” on its website which reads almost word-for-word like a BNP press release. The report, which isn’t bylined, gushes about how “proud nationalists” dug into their pockets to fund Brentwood & Ongar BNP candidate Paul Morris’s deposit, “packed into a back room of a patriotic pub”.

The post, on the Essex Chronicle website “This is Total Essex” – which also tweeted the piece – adds:

“The party operates under a veil of secrecy to protect members from those who oppose their beliefs and did not reveal the location of the meeting until just minutes before it was due to start. With the pub set to become a regular meeting place for the new group, they have asked us not to reveal where it is.

“Christine Mitchell, a 68-year-old grandmother from Chelmsford, will be running the branch from here on in. Mrs Mitchell, who is contesting the newly created Saffron Walden seat in the general election on May 6, said: ‘We are fighting for British jobs for British workers, that is the start but we are standing for other reasons – crime rates, the state of the education system and the fact MPs have stolen from the public.’

“The former Conservative leader of Westminster Council, Peter Strudwick, spoke for more than an hour during the meeting, rallying support for what he called “ideologies” for the future…

“Searching faces scoured the room until a man who had until then sat quietly in the corner, put his hand up to pledge £100. Others then thrust crisp £50 notes in the pot before the less well-off handed over their screwed up £10 and £20 notes. There was much applause and hand shaking as the money came flooding in, uniting the room in the campaign to bring about radical change.”

Readers vented their fury at the Chronicle’s appeasement of the BNP in the comments [These comments have now been deleted – see our update below]. Here is a selection:

• “I’m a journalist and this story is being passed rapidly between people in our industry. At first I thought it was a spoof by the BNP or a production error had uploaded a press release on to the site. Nope, apparently this is what passes for journalism at this paper.”

• “If Hitler had won the war, all journalism would be like this. But he didn’t. So stop glorifying racists and bigots.”

• “This is not serious journalism, this is pathetic pandering to extremists. Who on erath wrote this article? It’s interesting to see the name isn’t given – which means thisistotalessex.co.uk and the Gazette/Chronicle should shoulder the blame in clear conscious partiality towards an extremist party. It’s either unrepresentative and unproffesionally ridiculous, or sadly very representative – take your pick, people of Essex.

• “I am surprised that the reported who attended this meeting didn’t make a contribution to the BNP themselves, from the tone of the article it sounds like they’re already a fully paid up member! So much for impartiality and journalistic integrity. And what is the Gazette doing pandering to these racist thugs by agreeing not to print the name of the pub? If the members are not ashamed of their beliefs why do they need protecting.

“Mr Strudwick spoke of ideologies for the future. What were these then, fascism, racism, anti-Semitism, sexism, homophobia?

“Finally the article finishes by suggesting that this bitter party of hate peddlers want to bring about radical change. If by radical change you mean returning Britain to the predominantly white population that existed before 1948, this would throw Britain back into the dark ages.”

• “This article is shocking; where is the balance, the critical discussion (at the very least) of the BNP’s policies. I point readers to page 2 of the Essex Chronicle this week for a much better article on this ‘news’ story. I would also point the journalist towards the EXPOSE campaign, supported by the NUJ, which seeks to reveal the BNP for the Nazis and fascists that they really are.

“Finally, I would like to reveal the pub as the New Barn pub in Melbourne, Chelmsford, for any anti-fascists who want to rally against the far-right in our town. This was unveiled in the Essex Chronicle, which also points out that a number of regulars at the pub walked out when the BNP arrived, showing how these fascists are hijacking our local town.”

• “There are two issues that concern me about this item. Firstly “Proud”. Are you sure ? This shower bottled out of debating the issues in Chelmsford then run off to Brentwood to hold secret meetings. Proud ? Grubby more like.

“Secondly, where have journalism and editing gone on this site? No questions raised or cross examining ? None at all. This looks as though a BNP press release has been regurgitated in its entirety. Hardly the actions of an independent media during the run up to a General Election. Get a grip.”

The British National Party’s number one target in the forthcoming elections is to take control of Barking and Dagenham Council in Essex, where it has 12 incumbents – more councillors than in any borough in the country. BNP leader Nick Griffin is also standing in Barking, in the general election; Hope Not Hate is holding a day of action to combat the Fascist threat in Barking and Dagenham next Monday, May Day bank holiday.

The Essex Chronicle, which is published by Northcliffe Media, a division of Daily Mail & General Trust, was unavailable for comment.

All comments have been deleted from the Essex Chronicle. As of 17.54 on April 27th, the only comment is from Rianna and says:

“Why have the reader comments been deleted, I feel that it is important for people to have their say -particularly on this subject?”