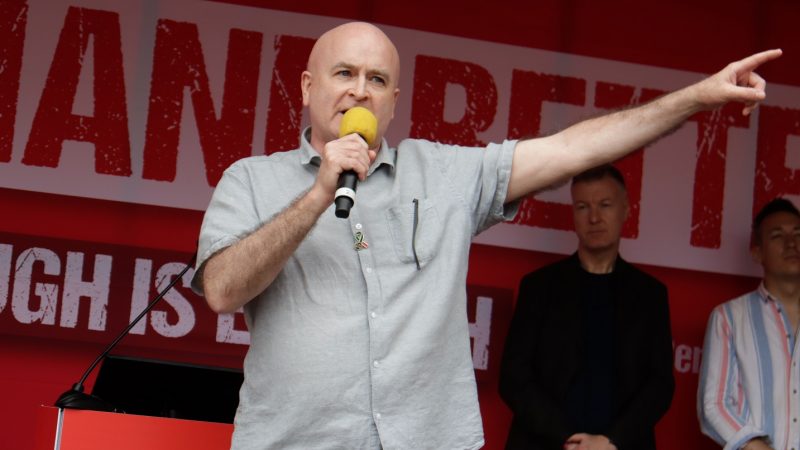 The Enough is Enough campaign has been building momentum since launching in August. Hosting packed out rallies across the country, the campaign now has over half a million people signed up, with major organisations from across the left formally backing it – including trade unions, Tribune magazine and even the Green Party.

Now, the campaign is planning to be “bedded down into every community in Britain”. That’s what the RMT’s general secretary Mick Lynch said when Left Foot Forward spoke to him at the CWU’s strike rally in Brighton this week, which coincided with the annual TUC Congress.

Lynch said that Enough is Enough needs to get to the stage where it “exists right across our communities in every party of the country.” He told Left Foot Forward, “The campaign will keep going. What we want to see is that bedded down into every community in Britain so that people can take those campaigns forward. The campaign against energy [costs] and the campaign against the cost of living crisis is obviously an important one.

“But it’s also manifesting itself in what’s happening in communities – the cuts that will happen in services, whatever you want to name: libraries, swimming pools, care services, health. They will be manifest there. And we’ve got to be able to coach people and mentor them into campaigning right across the country so that working people have their communities in tact, so that the services that we all rely on remain in place.

“So what Enough is Enough is about is making sure that people have the tools and the ability to campaign in the way that’s needed. So we’ll keep going with that. But it’s got to become a thing that exists right across our communities in every part of the country.”

Lynch also spoke to Left Foot Forward about the ongoing rail dispute. We spoke two days after the RMT announced a further three days of strike action on Network Rail – on November 3, 5 and 7.

With further dates for industrial action in the calendar, Lynch says that RMT members are “fully committed” to the dispute, and that the strikes will continue for as long as needed in order to get a settlement from employers. He said, “Our members are fully committed to the dispute. They’ve been illustrating that by the way that they’ve observed the strike action and the way that they’re turning out on picket lines in heavy numbers like this one here today with the CWU. Our members are totally committed to it and they will be committed to it as long as we need to take the action to get a deal from these companies.”

Up against the resolve of RMT members, Lynch accuses the government and the employers of escalating the dispute, saying Network Rail has threatened mass redundancies, and that the train operating companies are again seeking to get rid of the guard on rail services. When asked whether there has been any movement from the employers or the government, he says, “None whatsoever. And in fact Network Rail is making it worse. Their demands are being followed up with threats of mass redundancies and in fact issuing redundancy notices to us. The train operating companies who run the passenger service obviously are saying that they want to bring back guard-less trains and go back to the disputes that we’ve had over the last six or seven years. So, they’re piling it on and we think they’re doing that at the behest of the government. And so that’s got to change. We won’t get a settlement until the government changes its attitude.”

The immediate dispute isn’t the only battle the RMT is currently fighting. Lynch spoke to Left Foot Forward on the day that the government published its draft Transport Strikes Bill. That Bill seeks to ensure a minimum service is provided on the railway when strikes take place. Unions have warned that this proposed legislation would remove a “fundamental part of the right to strike” in making picketing effectively illegal.

At this year’s TUC Congress, delegates voted to oppose these proposals, passing a motion which committed the union federation to “resist this attack on transport and other workers”. In his speech proposing the motion, Lynch said that the trade union movement will, “Fight them in parliament, fight them in the workplace, fight them on the streets.”

Lynch says that his union will be responding to the proposals both in the courts and industrially, and says the RMT will always take “whatever action’s necessary” in industrial disputes. He said, “Well we’ll have to see them. We’ll respond to it through the courts. We’ll get the rest of the trade union movement in support of us. But we will respond to it industrially as well. We will take whatever action’s necessary at any time when we’ve got a dispute with our employers. We’ll have to see what that legislation says. I suspect it’s illegal. I suspect it’s in breach of international labour convention, and possibly the European Human Rights Act. So we’ll have to see what it says when they publish it in full. But I believe that legislation won’t stand, and it will be defeated by the trade union movement and in the courts.”