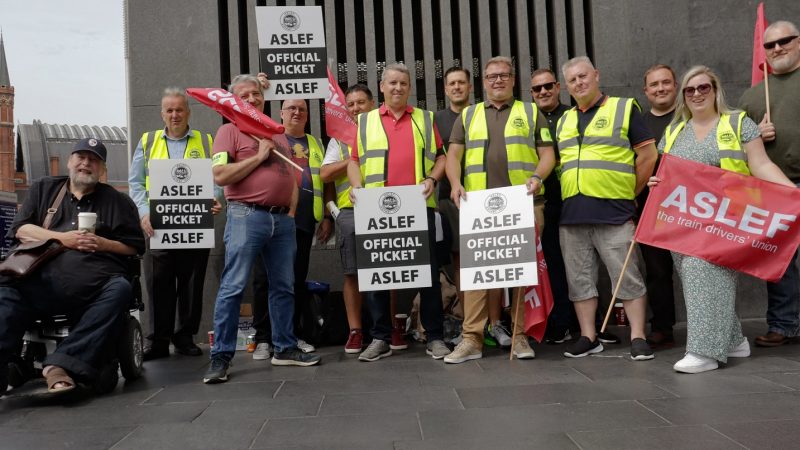 Since the start of the summer, few industrial disputes have been as high profile as those on the railways. The RMT, TSSA, Unite and ASLEF have all taken numerous days of strike action. ASLEF represents train drivers, and its members at 14 different rail companies have voted for strike action since July in a dispute over pay. At the TUC’s 2022 Congress taking place in Brighton from 18-20 October, ASLEF’s assistant general secretary Simon Weller spoke to Left Foot Forward about the ongoing dispute, the anti-union proposals coming out of the government and the relationship between the Labour Party and the trade union movement.

ASLEF is currently seeking a renewed mandate for further strike action from its members, and Weller says he is “very confident” the union will received that mandate, saying that morale within the union is currently “very high”.

That high morale may in part be buoyed by the high levels of support the strikes have among the wider public. While some would have expected the strikes to be unpopular among the public – the opposite is true, with polls suggesting more people support than oppose them. For Weller, this is noticeable not just in polling figures, but also in the nature of the response the union has experienced during the dispute – claiming that during previous strike action members of the union would receive death threats. He says, “the continual polling that we’ve been seeing is that the response from the vast majority of the public – and don’t forget we are the public as well! – have been saying, no, they support the rail workers in their fights. No one likes the trains not running and being inconvenienced and all the problems that come with that. I think interestingly, we’ve had no death threats. Whereas, in previous disputes, we would get death threats!”

Weller says that the fact that there is support among the public may explain why there has been what he describes as “some movement” from the employers in their dispute. He says, “I think there is now some movement. Whilst I might be looking with a little too much optimism with [transport secretary] Anne-Marie Trevelyan, I think the industry suddenly realised, and the government has realised that the attacks that they have been putting on train drivers and other rail workers haven’t landed with the public. In fact, the public in many ways are seeing this as action by proxy for them.”

Anti-union measures – no matter how impractical and ill-thought out – are to be expected from the Tories. But the Labour Party under Keir Starmer has also faced criticism from some in the trade union movement for failing to support unions in their disputes and for seeking to stop frontbenchers from joining workers on picket lines. With the current government collapsing, and a Labour government looking ever more likely, the relationship of the Labour Party to the trade unions is becoming even more important.

Weller strikes a diplomatic tone on the question of how Labour should respond to the ongoing wave of industrial action. He says, “I see what they’re trying to avoid. They’re trying to make themselves a small target”, adding “I understand why the party felt it was important that they weren’t seen as kind of the rabble rousing, campaigning – they wanted some to put some distance”. He later goes on to say that the way Labour’s position on picket lines was “executed” was “misjudged”, and adds, “I think there is a real important place for those MPs, and people who wish to be MPs, those who wish to be associated with the Labour Party to stand shoulder to shoulder with the trade union movement.”