Their bosses weren't paying them for travelling between clients' homes. 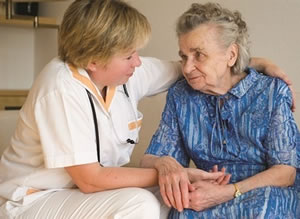 Carers who travel between their clients’ homes could be in line for thousands of pounds after a court ruled ten London carers were entitled to include travel time in their minimum wage.

Ten carers in Haringey took their private company employers to court as they were not paid for the time they were travelilng between clients’ homes, meaning they got less than half the minimum wage.

The judge said that carers should be paid for up to an hour’s worth of travelling and waiting time, opening up the chance for thousands of other carers to claim backdated pay.

One worker who wanted to remain anonymous said: “It’s been a long fight but it’s great the case has come good in the end. My hope is the decision will help other homecare workers receive the same justice.”

“I love my work – I like to help people and see them happy, especially those who are vulnerable. I worked every day through the pandemic which wasn’t easy, but it’s a vital job.”

Another added: “People think the job just involves giving out tablets or a cup of tea. But you have to be a doctor, nurse, and social worker. It’s a huge responsibility – you could be looking after someone in pain or distress.

“Care workers aren’t valued. We’ve been treated like we were nobody. That’s why this result is so important, not just for us but others like us. It’s been daunting bringing this case. But I believe in justice and we supported one another to the end.”

Commenting on the case and the need for wider reform of the care sector, Unison general secretary Dave Prentis said: “This is a major victory for these dedicated workers who dared take on their employers. Their long struggle is nothing short of heroic.

“It’s time the skills and experience of care staff were respected instead of them being underpaid and undervalued. The pandemic has proven just how vital they are in looking after the most vulnerable in society and keeping the care system running.

“These are the very same care staff who were applauded during the lockdown. They shouldn’t have to work in a system that breeds such awful treatment.

“This ruling sends a message to other care bosses that it’s completely unacceptable to pay staff illegal poverty wages. The government too must get tougher with employers so there’s an end to these law-breaking practices.”