False claims are becoming a theme of the campaign. 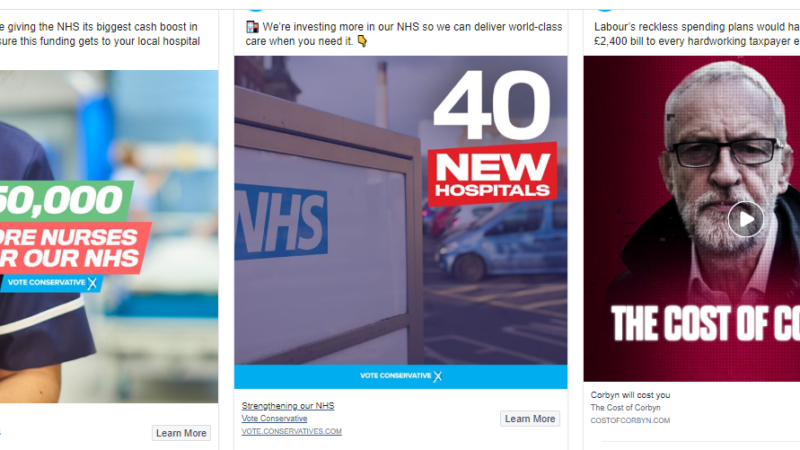 This election has been marked by dishonesty. During Boris Johnson’s interview with Andrew Marr, he made at least five misleading claims.

But this false information is not just being repeated on our TV screens but in our Facebook news feeds and Google searches too.

Facebook generally bans adverts from making claims that are “deceptive, false or misleading” but has made an exception for adverts from political parties.

Google claims to take a stronger line – but has accepted a Tory advert which looks like Labour’s manifesto but in fact links to a Conservative web site.

This advert claims people would pay £2,400 more tax a year under Labour. The Tories have also created a website making this claim, which they’ve sponsored on Google, and they included the claim in their manifesto.

Independent fact-checkers Full Fact have said this figure £2,400 is “misleading” and “meaningless”. Labour plans to fund its manifesto pledges by increasing tax on corporations, those earning more than £80,000, through a financial transaction tax, cracking down on tax avoidance and removing tax breaks for married couples.

Those earning less than £85,000 will not pay more tax – unless they are in a married couple, in which case they will lose their married couples allowance.

A Tory ad campaign which started on November 26 and is still active says: “Labour’s new gift tax proposals would slash the inheritance tax threshold from £475,000 to £125,000 meaning families up and down the country would be hammered, simply for passing their property to their loved ones. The cost of Corbyn will hit you and your family in the pocket.”

John McDonnell did once say the party was “looking at” this policy. He said: “We need to have a fairer system of how we can ensure that wealth is more fairly distributed – that’s one idea and we are listening to a whole range of ideas.”

Yet the policy does not appear in the manifesto. This Tory ad campaign began after the manifesto launch and is still active – giving voters a false impression of Labour policy.

3. False claims about the NHS

This ad campaign features two misleading claims. The first is the widely-discredited 50,000 new nurses figure. The second is the claim that the Tories “are giving the NHS its biggest cash boost in history”.

Actually, the Tories are planning a real terms 3.2% annual increase in NHS funding. The 1997-2010 Labour governments increase NHS funding by almost double that – 6% a year. So it’s not the biggest cash boost in history.

This advert says: “40 new hospitals” – but the government has only committed funding to build six new hospitals.