"We have a government that is criminally neglecting to tackle the huge problem of aviation." 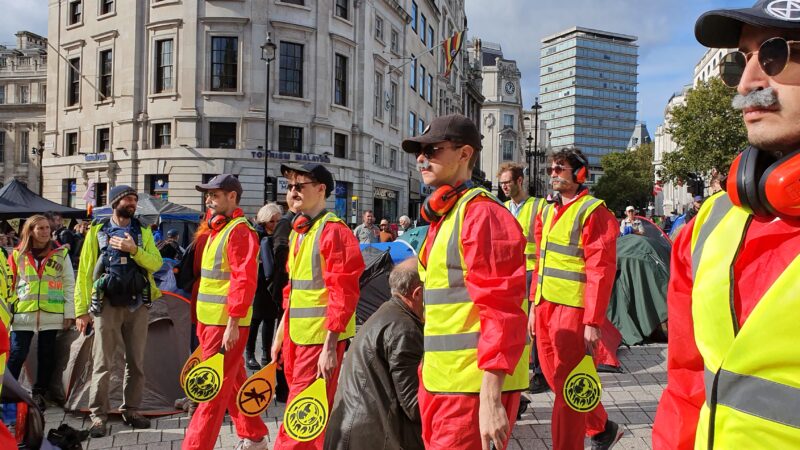 The campaigners say the occupation will ‘transform City Airport into another protest site of the International Rebellion’.

The protest – day four of a two-week London action – aims to highlight the government’s continued support for the aviation industry in the wake of catastrophic climate change.

In what organisers describe as the biggest mass participation action of the International Rebellion, the ‘Fly Today, No Tomorrow’ action will involve a ‘Hong Kong style’ occupation of the terminal building – lying, sitting or glueing-on in front of the departure and arrivals gates.

XR say hundreds of participants have already signed up to nonviolently use their bodies to close the airport, and are willing to sacrifice their liberty to achieve this aim.

Organisers state that if they don’t make it into the airport itself, they will blockade it from the outside, occupying both the DLR station and the access road.

In a statement, the group said: “Airport expansion such as this and the proposed third runway at Heathrow will make it impossible to meet this commitment, resulting in dire consequences as the Emergency worsens.”

Air travel is the fastest growing source of carbon emissions. 30% of the UK’s population take 70% of its flights – and over 82% of people in the world have never flown. City Airport is primarily a hub for business flights.

“London City Airport is planning to roughly double its numbers of flights. It is located in a highly built up area meaning that its flights cause a lot of noise-misery as well, of course, as climate-deadly pollution.

“It is used disproportionately by private jets and by financiers, business people and other members of the polluter elite flying in and out of the City of London, when often they could do what they need just as well by using digital telecommunications. This has to stop and Extinction Rebellion are here to stop it.

“…By non-violently shutting down this airport, in homage to the style of the Hong Kong democracy protesters, we are demonstrating the utter frailty of the transport systems that countries such as ours, unwisely, have come to depend upon.”

“Parliament may have declared Emergency, but the Government continues to support the expansion of air travel, in defiance of all reason. The Climate and Ecological Emergency affects us all, so it is essential that we all come together to solve it. We cannot do that with a government that is criminally neglecting to tackle the huge problem of aviation.”