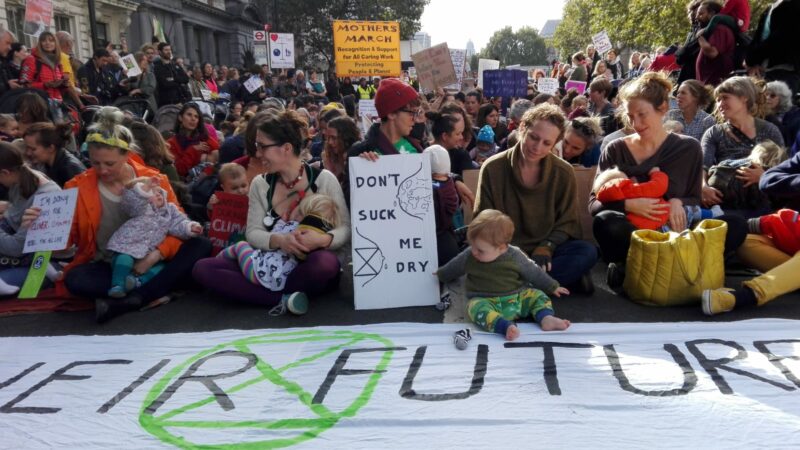 A spokesperson for Extinction Rebellion said “This is an action that shows that at the heart of this is the most basic of instincts: to protect our young, the protect the most vulnerable – the next generation.”

Amina, mother of 6, from the All African Women’s Group said “Women are suffering from climate change because as the water and land are polluted and harvests are destroyed then people go hungry. Women are the stronghold and grounding of the family and the country. When the climate changes we work harder fetching water and wood. We are the ones searching for something to eat and if there is nothing then we can’t feed our children including breastfeeding our babies. We create life so if our bodies are polluted then the children we give life to are harmed”.

The Extinction Rebellion protests continue in six sites across Westminster as well as at London City Airport. So far over 600 protestors have been arrested.

Extinction Rebellion claim that the police have escalated their tactics including using police vehicles to intimidate peaceful protestors and excessive use of force when making arrests.

They also claim the police attempted to prevent breastfeeding mothers from walking to 10 Downing St.

The Metropolitan Police tweeted regarding the restrictions in place