And of course, this isn't the first time 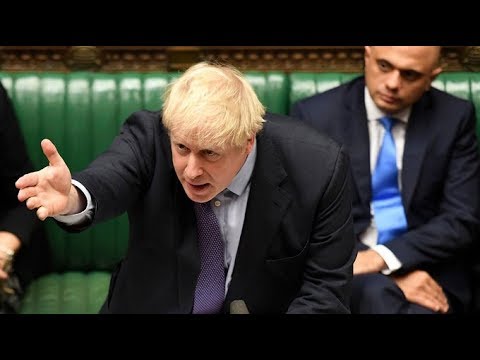 He just can’t help himself, can he? Fresh from defeat on the timetable of his EU Withdrawal Agreement Bill, Johnson fought back with fibs at Prime Minister’s Questions today.

Johnson repeated a well-debunked lie when it comes to NHS funding, telling the Commons: “…As I promised on the steps of Downing Street, [we’ll] begin the upgrade of 20 hospitals, and as a result of the commitments this Government are making, 40 new hospitals will be built in the next 10 years.”

As FullFact noted, rather than building 40 new hospitals, in reality, only six hospitals are to be upgraded by 2025. In other words, it was beyond spin.

2. “There will be no checks between Northern Ireland and Great Britain” Johnson said. This is untrue.

As Corbyn noted, under Johnson’s deal, Northern Ireland will remain on single market rules within the EU on goods and agricultural products. The rest of the UK will not.

That means there will have to be checks on goods going from the UK to Northern Ireland – otherwise the goods could enter the EU market which do not meet European standards.

Journalist Adam Bienkov pointed out to the PM’s spokesperson that the government’s impact assessment says there will be import and exit declarations for goods traded across the Irish Sea…and these declarations will be checked. In wonderful newspeak, Boris Johnson’s spokesman reportedly insisted this doesn’t amount to checks but ‘administrative processes’.

3. ‘The Scottish Parliament has no role in approving this deal’.

There are plenty of provisions in the deal which require legislative assent from Scotland (and Wales)…according to the government’s own assessment.

This is only a half lie. MPs voted by a majority of 30 to let the Withdrawal Agreement Bill (only part of the deal) past second reading – with several MPs saying it was only so they could amend it at the next stage.

There’s a hell of a long way to go before MPs actually approve the deal…including committee stage, report stage, third reading – and the House of Lords. And as we know, MPs rejected the government’s timetable – because it left just three days to scrutinise it in detail.

Porkies from the PM who said he’d ‘die in a ditch’ rather than ask for a Brexit extension…and then did? Who knew…

(Let us know if you spotted any more.)

See also: “Here’s some more times Johnson is known to have lied”