He's been sacked for lying twice. 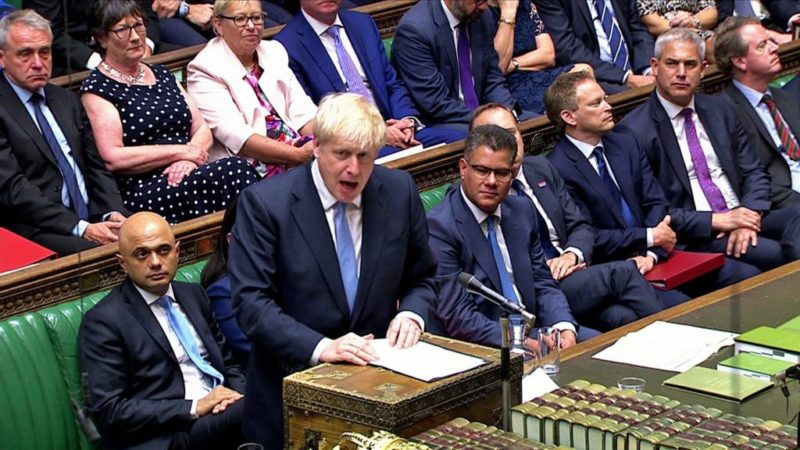 The head of Channel 4 News Dorothy Byrne sparked a furore recently after saying that Boris Johnson is a “known liar”.

These words were in the context of a speech in which she said journalists should not be afraid to call lies what they are – instead of using euphemisms like ‘strange claims’.

This speech drew an angry reaction from Johnson supporters. Johnson cancelled an interview with Channel 4 and a former Theresa May spin doctor said calling Johnson a “known liar” was not acceptable.

As if to illustrate Byrne’s point though, Johnson lied again yesterday, claiming that Melton Mowbray pork pies were exported to Thailand and Iceland but not to the US.

The head of the Melton Mowbray Pork Pie Association disputed this. He said they aren’t exported to Thailand and Iceland and, because they are made of fresh meat and have a short shelf life, exports to the US aren’t viable either.

How did the BBC report this? Not as a lie exposed but as “Melton Mowbray pork pie makers and No 10 clash over Johnson claim”. Again, Byrne’s point is proven.

This is not Johnson’s first misleading claim. As Byrne says, he is in fact a known liar. Here’s six times he is known to have lied.

1.When he was fired from The Times for inventing a quote

Within months of starting a job at Times, which he got through family connections, he was sacked.

In his first front page story, he invented a quote from an academic. The academic, who happened to be Johnson’s own godfather, complained.

Instead of apologising then, Johnson wrote a further story saying the “mystery had deepened”.

He was sacked by the Times but, through knowing its editor from Oxford, got a job at the Telegraph.

2. When he was sacked from the Tory front bench for lying about an affair.

However, Wyatt and her mother said the affair did happen and she had to have an abortion as a result.

A spin doctor to the then Tory leader Michael Howard decided Johnson had lied to them and sacked him from his role as party vice chair and shadow arts minister.

During the referendum campaign, Johnson was repeatedly pictured with a bus saying that the UK gave the EU £350m a week.

When an ITV reporter told him it wasn’t true, he repeatedly said that it was.

According to the UK Statistics Authority, this figure should be £289m a week and, more importantly, it doesn’t include what the EU gives the UK.

Nevertheless, Johnson continued to repeat the lie at least until 2017. The chair of the UK statistics authority wrote a public letter to him accusing him of a “clear misuse of official statistics”.

4. When he lied about Turkey joining the EU

Johnson was on the core group of the campaign committee of Vote Leave. A common Vote Leave campaign poster said “Turkey (population 76m) is joining the EU”.

Johnson himself wrote to Cameron to say: “The public will draw the reasonable conclusion that the only way to avoid having common borders with Turkey is to vote leave and take back control on 23 June,”

While there has been talk of Turkey joining the EU for decades, according to Full Fact, it is very unlikely to join any time soon.

As an EU member, the UK would have been able to veto Turkish membership if it ever did get close to joining.

5. When he lied about the EU’s kipper regulations

According to Full Fact, this is “incorrect”. The temperature requirement is a UK one.

6. When he promoted fracking

Johnson claimed: “There have been 125,000 fracks in the US, and not a single complaint to the Environmental Protection Agency (EPA).”

Full Fact say: “This is just not true. The EPA is currently examining the impacts of hydraulic fracturing on drinking water resources.”

18 Responses to “Is Boris Johnson a “known liar”? Here’s six times he’s known to have lied”