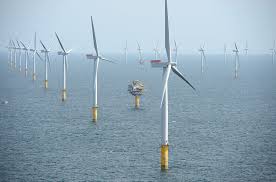 The left-wing campaign group Momentum has called on Labour to make its policies on climate change more ambitious.

This is the first time Momentum, which was set up to support Jeremy Corbyn’s leadership, has gone beyond Labour policy.

The group wants Labour to adopt a ‘Green New Deal’ policy and an aim to decarbonise the country by 2030.

The Green New Deal is a large programme of investment in renewable energy production, in energy-saving measures and public transport.

The policy’s aim is to stimulate the economy, provide jobs and fight climate change at the same time.

This is similar to the position of the Green Party of England and Wales who want to reach ‘net zero, where the country stops pumping out more cabrbon than it absorbs, by 2030.

Currently, Labour’s policy is to reach net zero by 2050.

The government’s current policy is less ambitious than Labour’s. Rather than 100%, they aim only to reduce emissions by 80% by 2050 and they are not on track to meet even this target.

The government’s official climate change advisory body, the Committee on Climate Change, recently recommended the government adopt Labour’s policy of reaching ‘net zero’ by 2050. They said reaching it any sooner than that though was “not credible”.

The committee said that “if replicated across the world, and coupled with ambitious near-term reductions in emissions,” reaching net-zero by 2050 would “deliver a greater than 50% chance of limiting the temperature increase to 1.5°C”.

A temperature increase of 1.5°C would lead to more heatwaves, rising ocean acidity, more frequent and more severe rain and rising sea levels. Around 271 million more people would be exposed to water scarcity.

Currently, Norway is the only major country to pledge to reach ‘net zero’ by 2030 – although this does not include international aviation or shipping. Net zero is also different to zero carbon emissions as net zero allows emissions as long as they are offset.

Momentum and Labour for a Green New Deal are asking Labour activists to help push a motion to Labour conference supporting the Green New Deal and 2030 zero carbon emission target.

Toby Barnes, of Labour for a Green New Deal, said: “Our campaign provides an opportunity for Labour members to lead a radical reconstruction of our country from the ground up.

“With Momentum putting its weight behind these motions, a transformative policy agenda is in sight. It’s now down to Labour party members to make it a reality at conference this year.”