Campaigners say the British Museum is allowing BP to 'whitewash' its involvement in Iraq in the aftermath of the 2003 invasion. 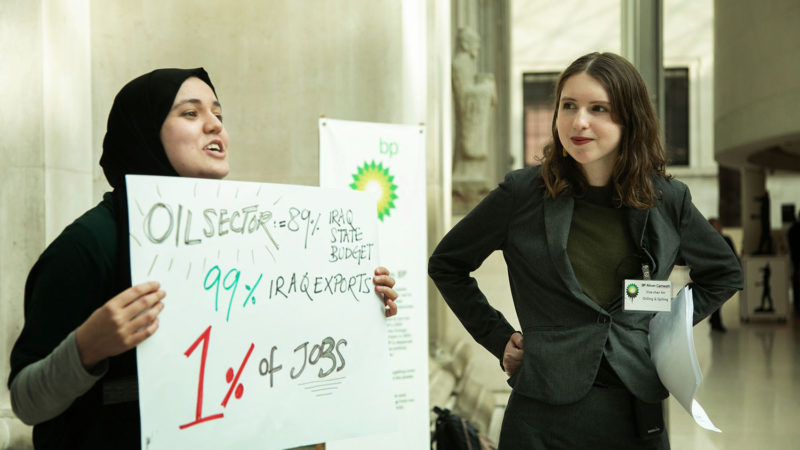 Protesters set up a fake BP ‘welcoming committee’ and Iraqi civilian protest at the press launch of a sponsored British Museum exhibition on Tuesday.

The “I am Ashurbanipal: king of the world, king of Assyria” exhibition launch at the national museum was interrupted over what oil campaigners deem ‘whitewashing’ of BP’s role in Iraq.

The Assyrian empire covered much of northern Iraq – meaning BP’s sponsorship jars with the oil firm’s controversial role in the country after the 2003 invasion.

The performers were from the activist theatre group BP or not BP?, and include a number of people of Iraqi heritage. They are calling for an end to BP sponsorship of British Museum exhibitions, and say they stand in ‘solidarity’ with protests in oil-rich Iraq calling for the ‘provision of basic needs’.

BREAKING: we are in the @britishmuseum at the press launch of new BP-sponsored #Ashurbanipal exhibition of Iraqi artefacts. BP staff sip oily champagne while Iraqis protest against BP-driven war, poverty and pollution, and the cultural plunder of their artefacts pic.twitter.com/MZ3ftQVSqp

According to UK government documents released in 2011, BP were ‘desperate’ to get into Iraq before the 2003 invasion, as it was ‘the big oil prospect’.

Campaigners say the company was ‘complicit’ in a war that has resulted in the deaths of hundreds of thousands of Iraqis, and the displacement of millions.

The activists also allege BP and other oil companies are guilty of ‘environmental injustice’, in their continued extraction of fossil fuels during a climate crisis, and via the pollution of water in Iraq.

The oil sector accounts for 89% of the state budget – but just 1% of jobs, as the majority of posts are filled by workers brought in from elsewhere.

BP or Not BP? say that while the oil industry makes billions of dollars, ‘most Iraqis feel little benefit from it’.

The new British Museum exhibition presents the BP as a ‘benevolent guardian and gatekeeper of Iraqi heritage’, according to the stunt group.

Accompanied by two official-looking pop-up signs, the performers posed as BP and British Museum staff, directing visiting journalists and dignitaries to to one of the signs which reads:

Assyria: A [spoof] message from BP…

“BP is delighted to be sponsoring objects from ancient Iraq. Like Ashurbanipal, we’re willing to do whatever it takes to keep control of the region’s wealth and resources.

“We’re thrilled that we were able to put our interests at the heart of the UK’s 2003 invasion of Iraq. Because, as the UK Foreign Office noted after we lobbied them in 2002, “Iraq is the big oil prospect. BP is desperate to get in there and anxious that political deals should not deny them the opportunity.”

“Today, our oilfields in Iraq keep getting more profitable, while Iraqis protest in the streets for basic services. We believe our empire will last for ever. Or at least until the climate change from our oil-driven business plan reaches truly catastrophic levels. Enjoy the exhibition!”

A spokesperson for BP or Not BP? said:

“Both the British Museum and BP should be ashamed of this exhibition, and its sponsorship. BP has played a key role in the war and in environmental destruction in Iraq. This has fuelled the social and economic inequality that Iraqis continue to suffer from and protest against.

“The Museum must end this sponsorship and also address how it has sourced the pieces for this exhibition. We won’t allow Iraqi culture to be exploited especially from those that have contributed to such devastation.”

But a British Museum spokesperson told this site:

“The British Museum respects other people’s right to express their views and allows peaceful protest onsite at the Museum as long as there is no risk to the Museum’s collection, staff or visitors.

“The long-term support provided by BP allows the Museum to plan its programming in advance and to bring world cultures to a global audience through hugely popular exhibitions and their associated public programmes. Over four million people have enjoyed an activity at the Museum supported by BP.”

However, BP provides less than 0.5% of the British Museum’s annual income. Yesterday’s unsanctioned performance is part of a growing wave of criticism of oil sponsorship of the arts.

In just the last month, it was revealed that Shell’s sponsorship of the National Gallery had come to an end, while on October 27th a group of performers from BP or not BP? created a pop-up anti-BP exhibition inside the British Museum’s I Object exhibition of objects of dissent.

This is BP or not BP?’s 52nd performance protest, and the group’s 33rd performance in the British Museum, as part of the Art Not Oil coalition.