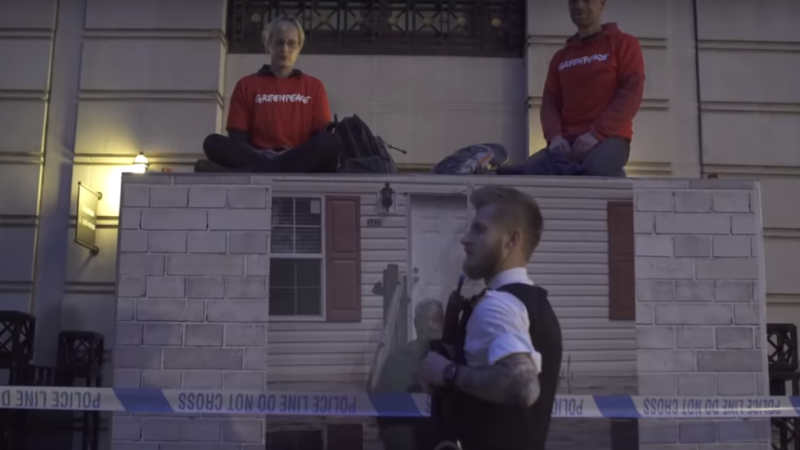 Greenpeace activists have locked themselves in large boxes blockading the entrances to BP’s London headquarters.

The organisation is demanding that BP immediately ends all exploration for new oil and gas and switches to investing only in renewable energy.

Paul Morozzo is one of those inside the boxes. He said:

“We’re shutting down BP’s HQ because business as usual is just not an option. BP is fuelling a climate emergency that threatens millions of lives and the future of the living world. The science is clear – we must stop searching for new oil and gas if we want a liveable planet. BP must clean up or clear out.”

“For too long, BP and the oil industry have paid lip service to climate action while lying and lobbying against it behind the scenes and spending billions scouring the world for more oil and gas. The reality is that BP’s whole business plan is a heavy bet against our hopes to avoid a climate catastrophe and must change.”

“People around the world are demanding radical action to stop a climate breakdown and secure a better future. It’s clear there simply is no place for companies like BP in that future. At their AGM tomorrow BP’s Bob Dudley has a choice – he can immediately end oil exploration and start switching to 100% renewables or wind down the company.”

According to Greenpeace, BP is expanding its oil-drilling operations in the Gulf of Mexico and is supporting Donald Trump’s plans to open the Arctic up to oil exploration.

Greenpeace also said that BP spends US$16bn on capital expenditure for oil and gas and just US$500m a year on alternatives to fossil fuels.

BP is outspending other oil companies on efforts to lobby against climate action.

In March an investigation by Unearthed revealed BP successfully lobbied the Trump administration to weaken regulations that would have prevented the release of millions of tonnes of the potent greenhouse gas methane.

BP has tried to clean up its image recently by sponsoring cultural events. Last November, activists protested against its sponsorship of the British Museum’s Iraq exhibition.

The activists said that BP pushed for the US and UK to invade Iraq in order so that it could profit from the country’s oil.

BP has also been criticised for its links to Chinese state projects accused of human rights abuses.

Similarly, the company’s work with Azerbaijani dictators has been condemned – with allegations of corruption and involvement in a military coup.

BP told the Guardian: “We welcome discussion, debate, even peaceful protest on the important matter of how we must all work together to address the climate challenge, but impeding safe entry and exit from an office building in this way is dangerous and clearly a matter for the police to resolve as swiftly as possible.”