Dominic Raab has just been appointed the new Brexit Secretary. But the MP is widely disliked in Westminster, and not without good reason. 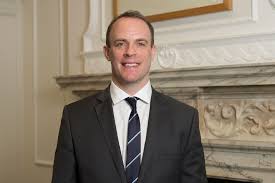 While being one of the lesser known Brexiteers, Raab is not the quietest of Conservatives and has made some headlines of his own in his eight years as an MP. Unfortunately for May, not for the best reasons.

So while his appointment is not surprising – he was once David Davis’ chief of staff – May might have some trouble keeping Raab on a tight leash.

Here’s some reasons why:

During a Victoria Derbyshire show specially themed around the 2017 snap elections, Raab made some seriously offensive remarks about food bank users.

“The typical user of a foodbank is not someone that’s languishing in poverty, it’s someone who has a cash flow problem episodically.”

2. Even crasser comments about feminists

In a 2011 article for PoliticsHome, Raab suggested that men suffered more discrimination than women, and that perhaps they should “burn their briefs” in similar protest fashion as 70s feminists burnt their bras.

“Feminists are now amongst the most obnoxious bigots (…) While we have some of the toughest anti-discrimination laws in the world, we are blind to some of the most flagrant discrimination – against men. From the cradle to the grave, men are getting a raw deal. Men work longer hours, die earlier, but retire later than women.”

3. Thinks the Brits are lazy

In 2012 Raab publish a book about productivity and state debt called Britannia Unchained, together with some of his Conservative colleagues.

In the book, the authors argue that:

“Once they enter the workplace, the British are among the worst idlers in the world. (…) Too many people in Britain prefer a lie-in to hard work.”

Other authors of the book included former international development secretary, Priti Patel, and Chief Secretary to the Treasury, Elizabeth Truss.

4. And that the NHS crisis is a “childish wish list”

Last year, days before the general election, Raab was confronted by a disabled rights campaigner who cried at him that “people are dying” due to austerity. But instead of responding to her demand for a cash injection in the National Health Service, Raab dismissed the comments as a “childish wish list.”

“I can think of lots of things that I would like to avoid making difficult decisions on and lots of areas like the health service or schools that I want to put even more money in. But unless you’ve got a strong economy creating the revenue, it’s just a childish wish list.”

Earlier this year, a Buzzfeed piece revealed the then housing minister was also a member of a Facebook group calling for the privatisation of the NHS.

Raab denied any involvement with the group and said he had “mistakenly been linked” to the campaign.

5. Quotes dodgy figures relating to his own portfolio

This April, Raab was once again making news for all the wrong reasons, when he got involved in a row with UK Statistics Authority after saying that immigration had resulted in soaring house prices.

The housing minister said migration had resulted in a house price rise of “something like 20%” in the last 25 years.

Problem was, the statistics used by Raab were neither public domain, nor was the body he cited them from in existence prior to 2010.

Raab then got a very public telling-off from the head of the statistics watchdog.

Safe to say Raab is no-one’s favourite option after Davis, and some even argue his appointment was a concession from Theresa May to the hard Brexiteers in her back-benches. But remains to be seen if she hasn’t instead brought a ticking bomb into her, already precarious, Cabinet.