Only a coherent package of reforms can end rough sleeping 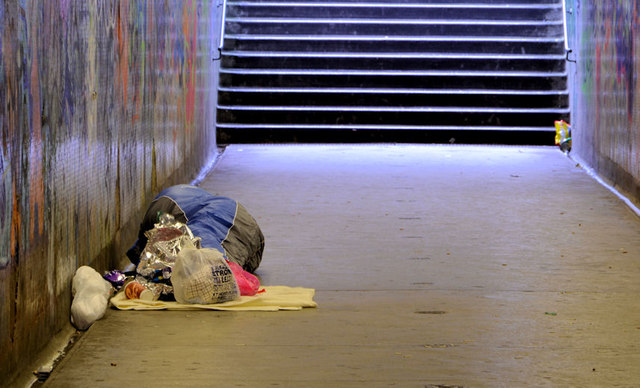 This beautiful synergy of producing significant long-term results while also cutting costs has even got the Tories salivating, with Sajid Javid stating the report “underlines the importance of our manifesto commitment to pilot a Housing First approach”.

Offering an unconditional and stable independent home to the most entrenched homeless people would undoubtedly be a major shift in homeless policy. However, the policy needs to be part of holistic welfare changes if we are to tackle Britain’s shocking homeless problem.

Housing First gives people with complex needs – such as mental health or drug abuse problems – their own home as well as a 24/7 on-call support team.

It also reconceptualises housing as a right and rejects the ineffective conditional approach. So far it has produced remarkable outcomes: the charity Homeless-Link say 70 to 90 per cent of Housing First tenants they surveyed remained in permanent accommodation, while in Denmark 90 per cent of 1,500 people who were given a home have not ended up back on the streets.

These staggering results come with the bonus of cutting costs – Housing First would bring an estimated saving of £4.02 million per year in Liverpool alone.

I know from my own experience within the sector that homeless hostels can be chaotic and dangerous places. Violence and sexual assault are common and alcohol and drug abuse is rife. Some rough sleepers can have as many as 10 different hostel placements a year.

Conversely, the stability and security of their own home allows people to far more effectively confront key personal issues. It also treats people with dignity and respect rather than forcing them to constantly prove they are worthy of it.

However, Housing First only helps the most entrenched rough sleepers and with homelessness having increased by 134 per cent since 2010, it is clear more needs to be done to prevent people losing their homes in the first place.

1 in 3 homeless households now come from the private rented sector, a figure up from 1 in 7 in 2010. Unsurprisingly the problem is most acute in London where 40 per cent of homeless acceptances are due to eviction from a privately rented property. This is often due to a sudden rent increase at the end of a contract.

Capping a certain percentage of rents in relation to average wages would make sure rents stay in line with what people can realistically afford. This would stop people being made homeless in the first place.

According to the DWP benefit sanctions are meant to “motivate claimants to take the necessary action to find work”.

A massive 39 per cent of homeless people have experienced sanctions, with a 2015 Crisis report finding that the hardship being sanctioned creates actually makes finding employment more difficult and can lead to people losing places in shelters and hostels.

Housing First projects have shown the benefits of providing a stable long-term environment for people to work through their issues and reintegrate into society.

Removing sanctions for people who are homeless would mean vulnerable people did not have to constantly prove themselves worthy of £73 a week. This would allow them to devote the hours spent on the phone to a benefits officer, or attending job centre meetings, to improving their mental health or learning new skills through a course. Building on a person’s abilities makes them employable -punishing them does not.

An effective programme of welfare reforms must be coherent. Reforms should question the economic and social relations that have created people’s situations, rather than focusing on blame or changing individual behaviour.

Results from Housing First trials show the effectiveness of this kind of policy. Let’s hope it’s not a flash in the pan.

Nye Jones is a freelance writer and social worker. He tweets here.

One Response to “Housing First is a step towards tackling homelessness, but we must demand more”