Welfare sanctions don’t ‘motivate’ homeless people - they grind them down as a message to the rest of us. 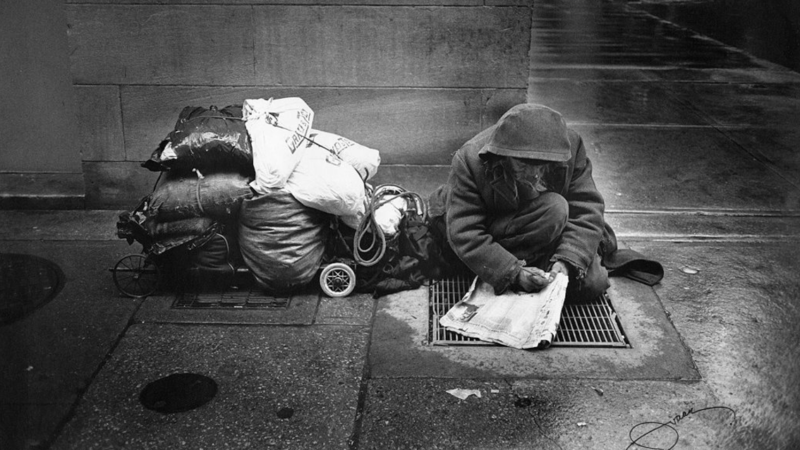 A million families at risk of becoming homeless in next three years, according to new research from Shelter. Aneurin Jones discusses his experience working within the system.

I work in a homeless day centre. Every day, I see the benefits system grind people down. And I know that punishment by the state only acts to exacerbate the problems faced by those without a place to live.

In 2011, David Cameron gave a speech in which he attempted to blame Britain’s welfare system for what he identified as the ills of the country:

“For years, we’ve had a system that encourages the worst in people – that incites laziness, that excuses bad behaviour, that erodes self-discipline, that discourages hard work … above all, that drains responsibility away from people.”

Welfare, once seen as a social and moral effort to provide destitute people with the most basic material well-being, had become a dirty word.

Now, with conditions placed on access to it, welfare has become a tool used to mould people’s behaviour, as anyone who has seen the film I, Daniel Blake will know. People are offered the very minimum in terms of subsistence in return for being a good citizen; they are severely punished when they fail to jump through these hoops.

Homeless people, with whom I work, are at the worst end of this treatment by the state. They are twice as likely to be sanctioned than other welfare recipients; 39 per cent of homeless people will experience this punishment at some point.

The aim of sanctions, according to the Department for Work and Pensions is to ‘motivate claimants to take the necessary action to find work’. However, in the case of the homeless these sanctions often have the opposite effect.

Yet rather than giving people the ‘kick’ needed to pursue employment, a 2015 Crisis report found that the hardship created by sanctions, as any thoughtful person might guess, makes it more difficult to travel to interviews, buy suitable clothes and can lead to people losing places in hostels and shelters, making finding employment yet more difficult.

Working in a homeless day centre, I see peoples’ daily battles with the DWP’s stringent conditions for receiving welfare – they’re given no leniency for the fact that they’re homeless.

Chaotic lifestyles and a lack of permanent address mean key paperwork is often lost or simply never received. One man even told me he was sanctioned for missing an appointment whilst receiving treatment in hospital.

People become embroiled in a seemingly never-ending fight to prove they are either looking for work or can’t work due to medical reasons. There is a constant queue for the phone to ring the DWP, with conversations rarely ending well.

The stress and despair of negotiating the system only serves to exacerbate underlying issues: mental health conditions, drug abuse and alcoholism.

In her book Hand to Mouth Linda Tirado argues that poverty ‘cuts off your ‘long-term brain’’, removing your capacity to plan and hope for a future because ‘if we do we’ll just get our hearts broken’.

This lack of hope makes short-lived pleasures the only option, intensifying people’s alcoholism or drug addiction. People become reticent to engage with services due to an understandable distrust of authority.

Rather than creating model citizens, the horrible irony is that conditional welfare actually accentuates all the worst characteristics of homelessness.

The only explanation as to why this clearly failing system is allowed to continue can only be ideological. The homeless individual is held responsible for their condition, their bad life choices are to blame. This, of course, is to ignore any number of systemic issues, out of the individual’s power, that lead to homelessness: from the astronomical cost of housing to domestic violence and family break-up.

In a liberal economic and moral system, individualism and individual choices are king. Homeless people are held up as examples of the wrong choices made, their continued presence on the streets a warning to the rest of us to make the correct decisions. Welcome to the 19th century.

Aneurin Jones is a freelance writer and social worker. He tweets here.

2 Responses to “As a social worker, I know that welfare sanctions trap homeless people in a circle of poverty”