Alex Salmond said IndyRef was a 'once in a generation' event. But what does that mean? 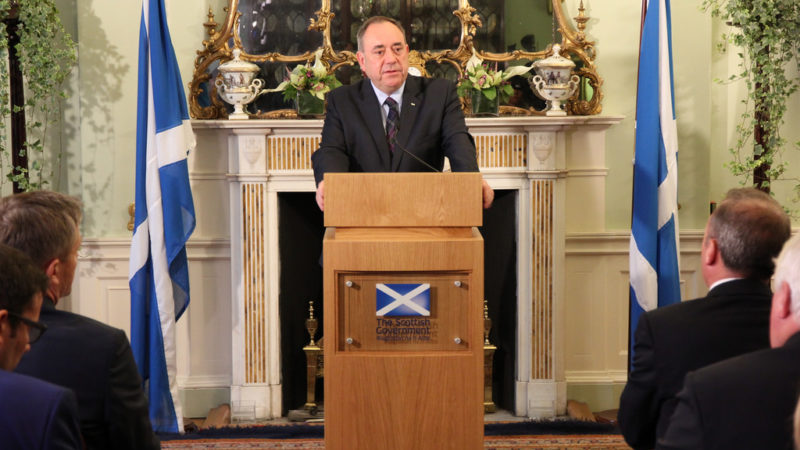 How long is a generation?

That’s the question on the lips of many as the Scottish government continues to pursue its efforts for a second independence referendum.

In 2014, just days before Scottish voters went to the polls to vote on their constitutional future, the then First Minister and SNP Leader, Alex Salmond, declared that if Scots voted ‘no’, there would be no second vote on the subject within this ‘political generation’.

Asked on the Andrew Marr programme how he defined this, Salmond expanded:

“If you remember that previous constitutional referendum in Scotland — there was one in 1979 and then the next one was 1997. That’s what I mean by a political generation. In my opinion, and it is just my opinion, this is a once in a generation opportunity for Scotland.”

We now know that as far as the SNP is concerned, that generation amounts to four and a bit years, given its desire to hold a second vote somewhere between Autumn 2018 and the Spring of 2019.

Polling by YouGov however suggests that the people of Scotland see it different. 39 per cent of respondents believe that a generation is 20 or 25 years, 13 per cent say 30 years and 10 per cent say 10 years.

The results do however show the tensions between those supporting and those opposition Scottish independence.  Although for both sides 20 and 25 years remained the most common definition of a generation, ‘Yes’ voters were more likely to argue that a generation lasted fewer than 20 yeas compared to those opposing independence (28 per cent of ‘Yes’ voters to 14 per cent of ‘No’ voters).

Commenting on the results, Matthew Smith from YouGov has observed that:

“Looking at the responses cumulatively, the point at which the majority of Scots say that a generation has passed is 25 years (this is true of both Yes and No voters). If we follow the ‘once in a generation’ logic, these results would dictate that the next Scottish independence referendum be held in 2039.”

Last year, Alex Salmond argued that it had only been an ‘estimation’ that  constitutional referendums were once in a generation.

Speaking to BBC Scotland he sought to explain his change of heart, telling the station:

“My estimation was that political constitutional referendums are once in a generation and I was making the example of 1979 and 1997 — that is why I always put it in that context every single time I said that. But of course, things have changed. And why have they changed?

“Well since the referendum there has been 56 SNP MPs elected out of 59, the Scottish government has been re-elected with more MSPs than all the Unionist parties put together in the Scottish parliament and specifically, of course, on a manifesto promise.”

See: Calls for Wales to be first “Nation of Sanctuary” for asylum seekers and refugees

12 Responses to “In Scotland, how long is a generation?”