If she really cares about Britain's friendship with the EU, May should take unilateral action 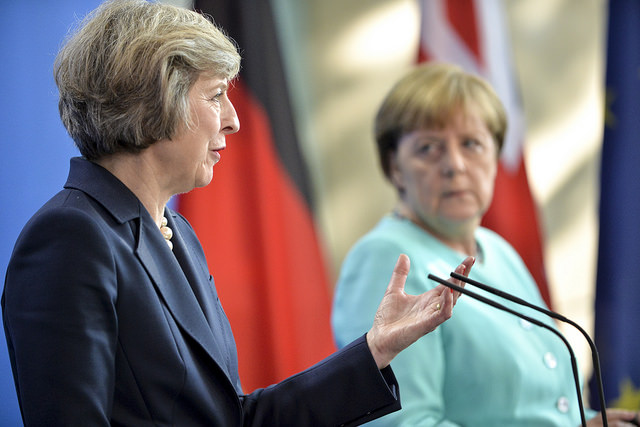 We know now, beyond any reasonable doubt, that the UK is on its way out of out of the single market, out of the customs union and out of Europe’s free movement zone.

“I want us to be a truly Global Britain — the best friend and neighbor to our European partners, but a country that reaches beyond the borders of Europe too. A country that gets out into the world to build relationships with old friends and new allies alike.”

That friendship between the UK and EU is under extreme strain, as Conservative MPs insult EU leaders, and May is apparently shunned by her European colleagues. This is partly reflective of a need, on both sides, to appear tough ahead of negotiations. But it also reflects a genuine antipathy and resentment.

It’s in May’s interest to diffuse that tension, to rebrand the UK as a friend and ally of Brussels rather than an adversary.

And the best way to do that is to unilaterally guarantee the residency rights of all EU citizens currently resident in the UK. It’s the right thing to do — EU citizens have built lives in Britain and contributed more than their share — but even from a selfish perspective, it’s a strategically smart step.

European leaders and their constituents are highly agitated when it comes to this issue. It’s on the question of residency rights that the political becomes personal. When Britain uses EU citizens as pawns, when it forces them to deal with the anxiety of insecure status, it feeds the idea that Brexit wasn’t a rational vote against EU institutions — it was a vote of contempt for other Europeans.

But, the power of a unilateral guarantee of residency rights (from the government’s perspective) is that it would take the wind out of the EU’s sails. Michel Barnier cannot present the UK as altogether villainous if London has already offered a clear sign of goodwill, accepting one of the EU’s key demands before the negotiations have even begun.

This won’t be easy: under the current processes it would take 150 years to process permanent residency for every EU citizen living in the UK. But the alternative — rooting out hundreds of thousands of current European residents — would only be more difficult, and far more politically contentious.

Sooner or later, the UK is going to have to reach a settlement on the residency rights of these Europeans, and it will almost certainly be favourable. So why not do it now, get it over with, and start the negotiations on better terms?

One Response to “Theresa May should guarantee the residency rights of EU citizens. It’s the smart thing to do.”