Four conflicts of interest not declared in The Times's scoop 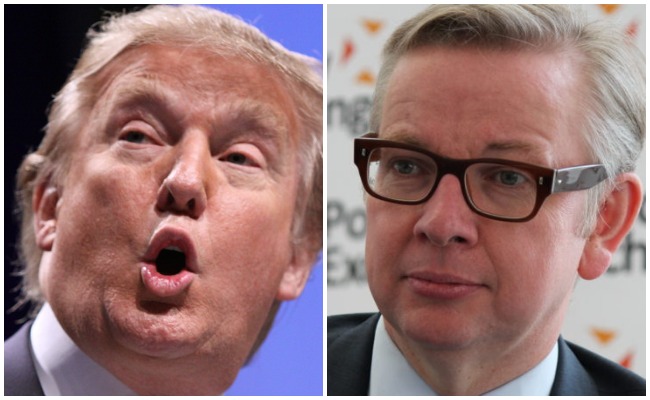 Trump: Michael, you should’ve written that we were gonna win.

Gove: Well, at least let me give you a copy of my book on how to fight terrorism.

Trump: Good, I’d love that. That’s fantastic — how to fight terrorism, I can use that.

So ends the transcript of Michael Gove’s ‘interview’ with president-elect Donald Trump for today’s Times. I use the word ‘interview’ loosely, not just because of the fawning nature of the resulting piece.

Would not the word ‘meeting’ be more appropriate for a tête-à-tête between two politicians?

Because, despite his background as a journalist, a politician is what Michael Gove most certainly is – though it’s never mentioned in the article.

Nor is it flagged up in the accompanying front page story co-written by Gove, or in the Times leader column, which sounds as if Gove could have written it. (It has, too, his over use of qualifying clauses, and, moreover, his supercilious vocabulary.)

Here are four pretty obvious conflicts of interest, all undeclared by either Gove or The Times in or around this piece:

1. Michael Gove is an MP and former cabinet minister.

Yet he discusses British politics with the president-elect of the United States without declaring an interest.

Gove was one of the leaders of the official Leave campaign, Vote Leave, during the EU referendum.

This interest is also left out of an interview that focuses heavily on the prospects for Brexit and trade relations with Trump’s America.

3. Michael Gove has been at the centre of government counter-terrorism policy.

As the above extract suggests, Gove wrote a book on Islamism in 2006, and has taken a keen interest in foreign affairs.

But when he writes about Trump’s views on Obama’s redline on Syria in 2013, Gove doesn’t mention that Obama’s U-turn followed a vote in the UK parliament lost by then Prime Minister David Cameron when Gove was part of his cabinet. (Gove reportedly harangued MPs outside the voting lobbies after the government’s motion was defeated.)

And as Education Secretary he helped shape government policy on counter-terrorism, most notably over the Trojan Horse plot at schools in Birmingham. Turf wars on this subject were waged between Gove and the then Home Secretary, which brings us to…

4. Michael Gove is an old rival of now Prime Minister Theresa May.

It was May who had Gove sacked from his role as Education Secretary, after Gove leaked stories to, er, The Times, criticising May’s policies at the Home Office. She later beat him in the Tory leadership election to become Prime Minister, and promptly sacked him from the Ministry of Justice.

By my count, that’s five jobs May has cost Gove – and precisely zero mentions of the fact in a piece covering Brexit and British politics.

(While we’re on numbers, Theresa May’s name appears but once in Gove’s whole Trump interview, and it’s in parenthesis to clarify who Trump is talking about. It would be generous to say this was solely because, as we learn from the transcript, Trump appears to have forgotten May’s name.)

This article also makes Gove the second British politician to meet Trump before Theresa May has the dishonour. (The other is Nigel Farage. Even Boris Johnson had to settle for Trump’s son-in-law.)

Given these facts, it’s hardly surprising that you can almost feel the strain in Gove’s knees while reading the piece. But the blatant nature of the political agenda at work is not made any less contemptible by The Times‘s failure to share it with its readers.

See: What to expect from Michael Gove’s new column at the Times