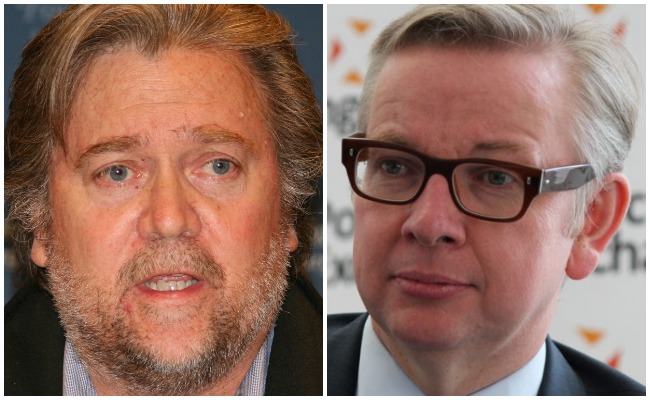 The Conservative MP and former cabinet minister, writing in today’s Times about his interview with Trump, published yesterday, says Bannon is ‘disconcertingly charming’.

He adds that the former editor of Breitbart, which Gove calls ‘provocatively right-wing’, is ‘clearly intellectually wide-ranging in his thinking’, but is disliked by people in Washington for his views and for helping Trump win.

“Bannon’s success has guaranteed him pride of place in the demonology of the liberal left and he’s been accused of every form of hate speech of which mankind is capable, including antisemitism.

That allegation sits incongruously, to say the least, with his close personal friendship and political alliance with Kushner, who is an observant Orthodox Jew and a staunch Zionist.

In person, Bannon is disconcertingly charming and he is clearly intellectually wide-ranging in his thinking, but for most in Washington his views, and his role in the Trump triumph, make him an irredeemably sulphurous character.”

Elsewhere in his love letter – sorry, article – Gove describes an ‘immensely dignified African-American attendant kitted out in frock coat and white cotton gloves’ working in Trump Tower as looking like someone out of Gone With The Wind, the 1939 movie which famously romanticises the slavery-era American south.

Breitbart is a toxic brew of wind-up bigotry and a favourite of open neo-fascists and racists. Bannon has described it as ‘the platform for the alt-right’, a movement founded by white nationalist Richard Spencer.