It can happen here. It already has. 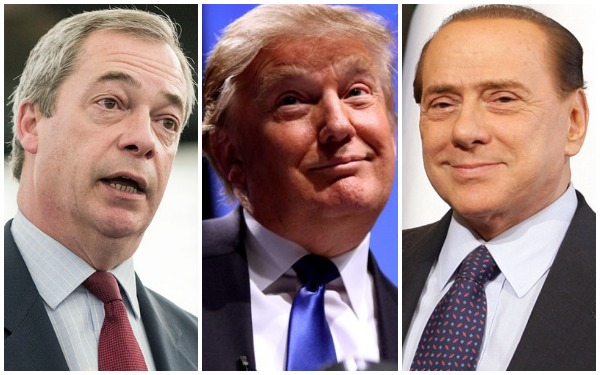 Could Donald Trump be Silvio Berlusconi mark two? Harsh anti-immigration plans, ridiculously low tax, highly illiberal policies; the two tycoons, who both used the fortune they made in the construction sector as a launch pad to notoriety, are politically very similar.

Not just that, they also share accusations of male chauvinism, inveterate tax evasion and out-and-out cronyism.

Berlusconi brought Italy to its knees. How his country escaped – if only by a whisker – a similar fate to that of Greece is still a mystery. Under the Milanese baron, an already cumbersome public debt, of which centre-left governments are also to be blamed, spiralled right out of control. That’s a huge bill the poor will have to pick up.

Many justifiably fear that Trump will wreak havoc on many levels too: among hard-working ordinary families in particular. Remember Trump’s pledge to scrap the Affordable Care Act, better known as Obamacare? This plan is likely to go through very soon.

Eventually, Italy somehow got rid of its bunga-bunga prime minister, dubbed a ‘party animal’ by The Economist in 2011. Yet post-Berlusconi politics is nevertheless awash with irresponsible illiberality.

Aside from the usual suspects peddling hatred against immigrants (‘Do rescue them, if you must, but take them straight back to Libya,’ bark many right-wing Italians), you are still confronted with hopelessness.

Beppe Grillo’s Five Star Movement could have spawned an Italian version of the progressive Podemos. Now it’s clear to everyone: fat chance of that ever happening.Five Star isn’t and offers no alternatives, unless you think lira-driven autarchy is one.

And Podemos is pro-EU, Five Star’s alliance with UKIP and other far-right organisations is still in place, despite the increasing irrelevance of Nigel Farage’s party. ‘Now that Britain is leaving the EU… there really is no point to UKIP, and it shows,” the Independent‘s chief political analyst John Rentoul wrote last week.

The Conservatives are committed to quitting the EU, leaving UKIP clutching at straws with no other causes to pursue. Is UKIP an empty outfit, a black hole sucking in the reputation of anyone gravitating around it?

UKIP’s original plan was to do maximum damage to the EU – an international project for the common good – which it compared unfavourably to the Commonwealth. Yet since when have the two ever been in competition?

Perhaps the former has cast a shadow on the latter, making it look less pretty. A narcissistic problem, it seems. The Sun famously told its readers that ‘Queen [Elisabeth II] backs Brexit and supports the Commonwealth,’ even though this wasn’t true.

Hopefully, individual Brits may be able to choose to remain EU citizens, if a motion in the EU Parliament goes through. Brexit campaign leaders find this proposal divisive. It certainly is a profoundly democratic one, rebalancing the potential injustice of the 52 per cent dictating to the 48 how to live and renounce established prerogatives.

Why take EU citizenship away from those who cherish it? What crime did they commit? Open societies and their freedom of movement are the most sacred concepts we have. It’s taken us all a really long time to get here.

We need these liberal approaches today more than ever, especially after the June referendum, a merely consultative affair that has turned into a nightmarish watershed splitting the British into warring tribes.

Americans will find themselves in a similar situation: the gulf between Trump and Hillary Clinton is immense. It reflects the times we live in: the half-truths or blatant lies peppering myriad online conversations bear no stigma. Bubbles are big enough to feel safe in. Berlusconi, Trump and Farage know this very well; and disseminate as they please.

The focus is on the buoyant reaction of Marine Le Pen to the US election, but neighbouring Italy is just as problematic as France. Trump has won in America – and in large parts of western Europe too, where many will be happy to cheer him on.

See: Bernie Sanders has a message for US president elect Donald Trump