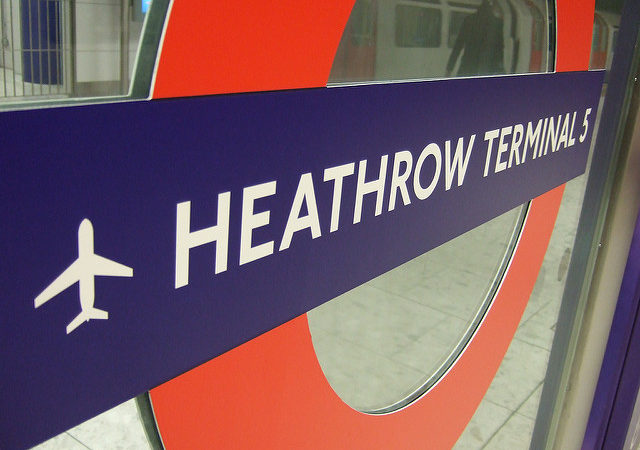 Yesterday, we learned that the world has entered a dangerous new climate change reality.

World average CO2 emissions have breached the critically important 400ppm threshold. This is a sombre reminder that the action on climate change needs to be the top priority informing all government policy-making.

Yet today, the government will almost certainly give the green light to Heathrow expansion.

That expansion will not be voted on in the Commons before next year is a welcome short-term reprieve, but the decision to expand any airport in the UK at all is a form of climate change denial.

Theresa May has promised to ratify the Paris Agreement by the end of the year. But, for that promise to be a symbol of actual intent, we must be asking whether we need airport expansion, not simply on which community should we foist it. The answer to the question is no. Britain can make an attempt to meet its commitments under the Paris climate agreement, or it can wave through airport expansion. It can’t do both.

Similarly, while the current administration is overseeing a rise in carbon emissions emanating from road vehicles, there are low carbon alternatives on the horizon. Electric road vehicles is an emerging market, with an increasing and diverse groundswell of support.

No such future exists for aviation. Aviation is a top-ten global polluter and, worryingly, emissions are expected, at the current rate of expansion, to balloon by 300 per cent if something isn’t done soon. The historic ICAO aviation emissions deal agreed in Montreal focused not on reducing emissions from engines or replacing fossil fuels, but on relatively weak energy efficiency and dubious ‘offsetting targets’, that won’t be mandatory for many years to come.

The truth is that, just as we can’t develop any new fossil fuel reserves or push ahead with fracking, we can’t expand Heathrow or any other UK airport and hope to keep to the upper 2C limit for global average temperatures rises agreed in the Paris accord. Unless we take fast and decisive action to halt the use of Britain’s current fossil fuel stores, the more ambitious 1.5C limit is already beyond our reach.

Despite this stark reality, what we hear from our Ministers and what we see in our papers is impatient news of an ‘airport capacity crisis’ myth driven by the multi-million-pound budgets of the airport lobbies.

Heathrow, an airport which has so far seen soaring pre-tax profits of £223m in 2016, has spent almost £2m on its attempts to lobby TfL commuters in London while Gatwick, which made £141m in profit last year, has matched that spending almost pound for pound.

The total advertising spend for both campaigns is estimated to be between £7m and £40m. Heathrow airport created and funded an entire ‘grassroots’ organisation to lobby for their paymaster’s cause. The airport lobbies stand accused of attempting to subvert democracy by buying unfair public and political influence.

The reality is that there is no airport capacity ‘crisis’ in Britain. It has always been a myth. That more passengers fly in and out of London than any other city in the world is not an indication of a ‘crisis’; it’s merely a statistic with some important caveats.

In fact, every airport in the UK, apart from Heathrow, is operating under capacity; existing rail services can offer genuinely workable alternatives for the nine out of the ten of the most popular routes out of Heathrow airport; and, perhaps most importantly, three-quarters of international passengers are disproportionately wealthy and travel for leisure.

That last caveat is a stark reminder of the inherent unfairness ingrained in Britain’s aviation industry. Just 15 per cent of the most wealthy frequent flyers take 70 cent of flights. The current taxation system means those who don’t fly and those who fly even just once a year are subsidising the jet-setting lifestyles of a privileged few.

As Greens, we support a fairer frequent flyer levy that would help reduce demand driven by the privileged few and reduce costs for the average UK holidaymaker. At the same time, demand for business flights can be reduced by around 20 per cent with investment in remote and digital office solutions. The World Wide Fund for Nature is currently running a scheme to help organisations achieve this target.

Furthermore, the post-referendum consensus is that aviation demand in the UK will not rise by the numbers outlined in the report. Indeed, Theresa May’s final airport decision, when it comes, is likely be based on the now dreadfully out-of-date report published by the Airports Commission.

Which, alongside vastly inflating the economic and employment benefits of expansion, based its passenger projections on figures from 2013. Britain and her economy were in a very different place three years ago. The economic impact of the EU referendum result and the expected impact of leaving the European Union have rendered the commission’s findings at best, inaccurate, at worst, useless.

With the decision looming, I’m asking Theresa May to consider not the false choice between Gatwick and Heathrow, but the kind of future she wants to build for Britain.

Prioritising the needs of a small number of wealthy jet-setters over the needs of ordinary holidaymakers and listening to corporate lobbyists while ignoring the local communities set to suffer the immediate air and noise pollution impacts of expansion, to which the government has no answer – as leaked documents reveal, is hardly a step towards delivering a country that ‘works for the many, not the privileged few’.

Moreover, ratifying the Paris Agreement without any intention of honouring its commitments and, subsequently, failing to deliver a secure future for our children and our children’s children is hardly working in the long-term interests of the British people.

Keith Taylor is Green Party MEP for the South East

See also: Labour should unite with the Greens to block Heathrow expansion

7 Responses to “Heathrow expansion is unnecessary, unfair and incompatible with our climate goals”