We must seriously question this government's commitment to climate action 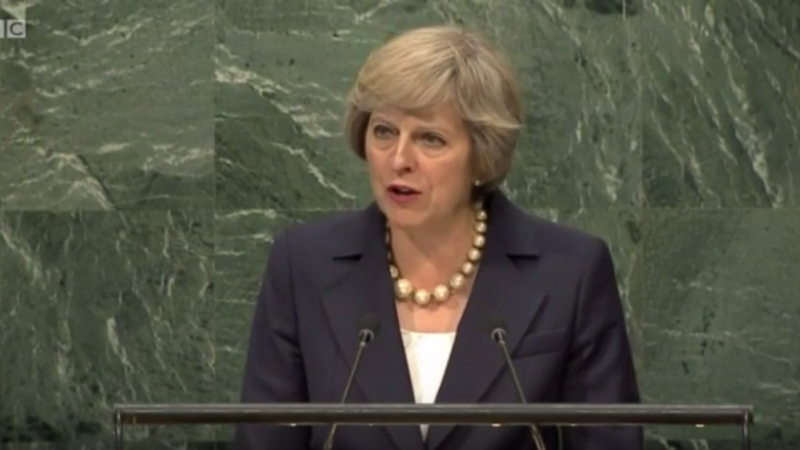 In her maiden speech to the UN yesterday, Theresa May confirmed that the UK will ratify the Paris climate change agreement by the end of 2016.

“We will continue to play our part in the international effort against climate change. And in a demonstration of our commitment to the agreement reached in Paris, the UK will start its domestic procedures to enable ratification of the Paris agreement, and complete these before the end of the year.”

Opposition MPs and environmental activists, who have been pressuring the government to make progress on ratification, unsurprisingly welcomed the news.

But it’s still not clear why it took so long for the Tories to commit to ratification, considering that the UK has portrayed itself as a climate leader in recent years.

Indeed, the requirements of the Paris agreement — that each state take on nationally determined contributions to keep temperature rise well below two degrees — are already essentially written into UK law. The UK’s Climate Change Act 2008 requires an 80 per cent reduction in emissions by 2050, which is equivalent to the commitments that are likely to emerge from the Paris Agreement.

In other words, David Cameron and Theresa May have, for eight months, delayed committing to an international climate change target that the UK has already domestically enshrined.

The first possible explanation, as ever, is incompetence. This government is caught in the headlights of Brexit, paralysed by anxiety and indecision — as its dithering over Hinkley showed.

However, it may also be the case that May was being deliberately obstreperous, sending a defiant message that — whether on climate change accords or Article 50 — the British government will not be pressured into taking any action before it’s good and ready.

This kind of belligerent behaviour is extremely unwise at a time when the UK needs all the international friends it can get.

Most worryingly of all, the delay may be attributable to the Tory government’s growing indifference to climate issues.

The days when David Cameron claimed to lead ‘the greenest government ever’ are long gone; the UK has been rapidly backsliding on climate change since the 2015 election. Last winter, Cameron and Osborne rolled back support and financial incentives for clean energy use, and increased subsidies for fossil fuels.

And things will only get worse under May. Her public statements on climate change have been extremely few and far between, her cabinet contains known climate sceptics and one of her first major actions as prime minister was to scrap the Department of Energy and Climate Change.

Moreover, the climate change minister Nick Hurd recently hinted that the latest carbon budget plan, which was supposed to be published this autumn, may in fact be delayed until 2017 — a pretty clear indication of where emission reduction stands in the government’s list of priorities.

And on top of all of this, Brexit means that in the coming years, the Tories will not be held to account by European environmental regulations and standards.

The situation is grave. The UK may be about to plummet down the rankings of climate-friendly nations and, as Asad Rehman of Friends of the Earth commented, the ratification of the Paris Agreement ‘won’t be worth the paper it’s written on’ if the government continues to invest in fossil fuels.

To meet the targets of the Climate Change Act and the Paris Agreement, the UK needs a detailed and robust plan. And this government is either unable or unwilling to provide one.

See also: We can democratise energy supply by giving control to communities

One Response to “The UK will ratify the Paris agreement by the end of the year – but what took so long?”