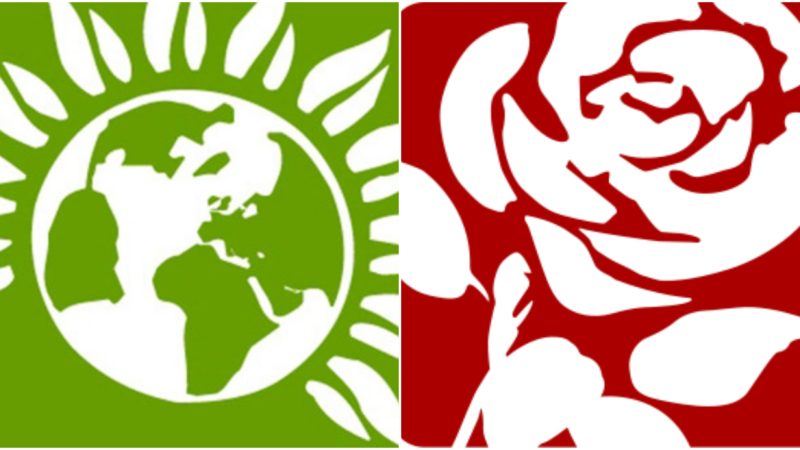 Newly-elected Green Party leader Caroline Lucas has said that a Labour commitment to proportional representation would be a ‘red line’ in any discussions about electoral pacts.

Lucas made the comments as figures from Labour, the Lib Dems and the Greens came together at the Green Party’s Autumn Conference for a discussion on the prospect of a ‘progressive alliance’ for the next General Election – a key plank of the Brighton Pavilion MP and Jonathan Bartley’s leadership bid.

Beginning the discussion, Lawson argued that ‘the old ways of operating aren’t working’ – pitching left-wing parties against left-wing parties. ‘If we had a PR system we wouldn’t have to do this’.

However, he sounded a word of caution about the idea behind any pact:

“This cannot be a coalition of the losers…The electoral system cheats us but we have to have a positive message”.

In a session that often returned to Britain’s winner-takes-all voting system, Rupert Read argued ‘there is no prospect of saving the planet under First Past the Post, or securing the crucial constitutional changes we need: federalism, Lords reform and PR’

Lisa Nandy MP was the most cautious about the practicalities of any electoral pact. She ruled out the idea of formal pacts, or open primaries, in favour of more cooperative, collaborative working.

“By listening and working together we get much better answers. We can either see pluralism in this country as a threat and try to stop it or see it as a strength and use it to make this country and fairer and better place”.

Calling for a proportional voting system, Nandy said that ‘one of the biggest restraints in this country is our electoral system’.

Caroline Lucas MP said the need for a progressive alliance was built on the fact that the climate crisis and need for democratic reform is ‘urgent’.

‘Labour took their eyes off Kemptown in 2015 to fight me – and they lost it,’ she said.

However, reflecting unease within the party about the practicalities of any pact, she said that ‘this is something from the ground up – not being imposed from the top down’.

Lucas outlined a number of options for any alliance.

‘It could mean open primaries, or could mean one party just spending less than usual – there are different ways of doing this. We don’t do it by stitching up agreements behind closed doors or imposing anything from the centre – decisions have to made at the local level.’

At the heart of it is the fact that ‘no one party has a monopoly of wisdom on every single issue’, while harking to the Brexit mood: ‘This whole agenda is about ‘taking back control’’

Journalist and former Lib Dem candidate Chris Bowers said the remit of an alliance needed to be about more than PR.

‘If we make cooperation solely for electoral reform it just looks like a selfish lunge for power. We’re not going to get hope with some technocratic fix – we need ideas.’

The Labour debate on PR

Accoding to Compass chair Neal Lawson the Labour Party is shifting on PR:

“The glacier is melting. There is real movement in the labour movement and the Labour Party towards PR.”

He praised the SNP for continuing to back reform, describing their commitment as ‘amazing’ since the first-past-the-post system hugely benefits them in Westminster elections.

But Read reiterated a key Green position on any alliance: ‘If Labour move on PR, we have something here. If they don’t, we probably don’t.’

‘This Labour shift comes from a generational shift – politicians who’ve come in at the same time a me,’ the MP said.

Reiterating her opposition to electoral pacts, Nandy said ‘Anger at devolution in Manchester was about deals done behind closed doors. People are against politicians who seem to be compromising all the time.’

There was some Green unease about whether an alliance was even desirable – including a heckler arguing against deals with Labour, while there was sympathy with another member saying ‘Why should we work with a Labour party that doesn’t even let its members vote?’

Another audience member added ‘there are a lot of green parties who would not be comfortable with standing down without an open primary.’

However, Caroline Lucas said an alliance was needed nonetheless.

“When I joined thirty years ago I thought we’d have more than one MP by now. The climate crisis is urgent, inequality is urgent. Electoral reform is a red line. An MOU [memorandum of understanding] that parked the issue of nuclear is still worth fighting for because this is urgent.”

Lawson finished the fringe on a positive note about the importance of working together: ‘We need to prefigure the kind of world we want – let’s build the world we want to live in now.’

Josiah Mortimer is a contributing editor at Left Foot Forward and is reporting from the Green’s Party’s Autumn Conference in Brighton. This report is based on the panel ‘Progressive Alliances: The case for cross-party working and why it could be a game-changer for the Green Party’

See also: Progressive alliances could be a game-changer – for the Greens and the country

15 Responses to “Lucas: Electoral reform would be a ‘red line’ in pact talks with Labour”