Farage is a massive hypocrite. What happened to standing up to corporations? 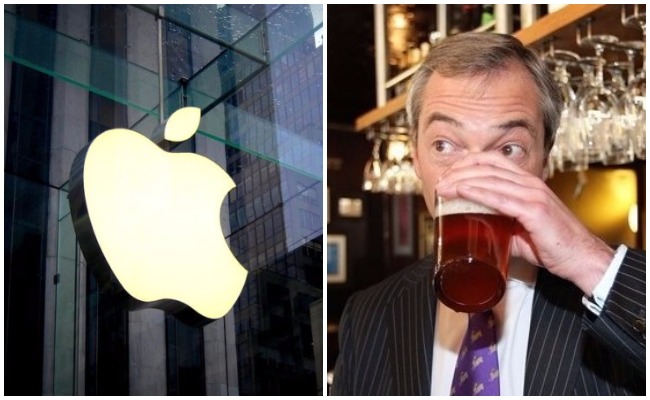 Is Nigel Farage the biggest hypocrite in Britain? Judge for yourself.

Throughout the EU referendum campaign, the UKIP leader trashed the ‘multi-nationals’ and ‘big business’, posing as a defender of the interests of the working class.

He repeated this sentiment last week when he joined US presidential hopeful Donald Trump on the campaign trail, saying ‘the little people’ who voted for Brexit managed to ‘overcome the multinationals’.

But now that one of the world’s largest corporations has been fined 13 billion euros by the EU Commission for tax evasion, Farage weeps only for big business.

Asked on Talk Radio today whether Apple should pay more tax, the champion of the little guy replied:

‘In this particular case, Apple, as a very small company, went to Ireland to try and domicile there, for corporation tax purposes, and did a deal with the Irish government.

Farage instead turned his ire on an overweening EU Commission for violating national governments’ sovereign right to offer companies sweetheart deals on taxation, adding: ‘there’s something wrong with that’.

He went on to say the ruling could be an opportunity for a newly independent Britain:

‘What retrospective taxation like this does is it puts off investors from putting money anywhere in the European Union.

Whatever could he mean? Farage dispels any doubt, suggesting corporation tax (and others) should be low so big multinationals feel welcome:

‘I think a post-Brexit Britain should have a very competitive tax rate and be encouraging as many countries as possible to come and headquarter in our country.’

When pressed, he called for a flat tax for all business, a policy outlined in last year’s UKIP general election manifesto.

Not content with all this pandering to big business, Farage even provided a defence of corporate welfare, saying with admirable candour:

The Freudian slips here are worth noting. Corporate welfare is described as ‘giving people incentives’, with the word ‘people’ humanising massive corporate giants. (As a former presidential hopeful, Mitt Romney, once erroneously said: ‘Corporations are people’.)

Meanwhile, the mix up of ‘country’ and ‘company’, so that the government is using tax money to seduce these firms to ‘come and invest in your company’, neatly reveals where ex-City broker Farage’s class loyalties lie.

All in all, the outgoing UKIP jockey proves yet again the hollowness of Tory populism – a regular subject here at Left Foot Forward – whereby a politician can come from a rally with a billionaire to tell us that Apple – Apple – is being treated unfairly, call for massive tax cuts and handouts to corporations, and still pose as a man of the people taking on the establishment.

As Farage says himself during the interview, (referring to the EU), ‘There is an awful lot of hypocrisy going on here’. It’s about time people started calling the faux-populists out on this – and presenting an alternative.

9 Responses to “Nigel Farage wants to cut taxes for big firms like Apple – some man of the people!”