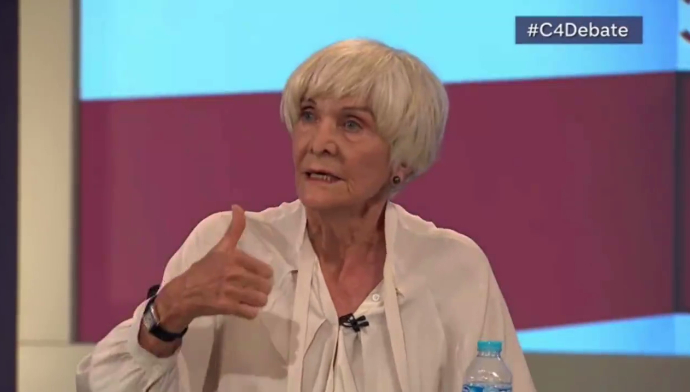 With celebrities and politicians yelling slogans at each other, and a host who looked as if he’d rather be somewhere else, the debate more resembled a scene from Chris Morris’s Brass Eye than a serious current affairs programme.

Standing out like a gem in a dung pile was this peroration by actress Sheila Hancock, who spoke about the origins of the EU after the Second World War.

This context is important in understanding the virtues of the European project, at least in its hopes of guarding against a return to an inter-state bloodbath, (as had been the norm for centuries).

Hancock’s speech sent the ‘instant response’ polls of the studio audience to 63 per cent for Remain immediately after she had spoken.

‘I was a child during the war, and I want to just go through the origins. I was bombed, I was evacuated. I had a horrible, horrible time, and I hated, hated the Germans.

My first husband was aircrew during the war – he was older than me – and he bombed and killed many Germans, and it haunted him for the rest of his life.

My mother and father lived through two World Wars that were started in Europe. The second one cost 51 million lives.

Now, when I was told, and my generation were told, that we were going to unite with our enemies and try and build a better future, I rejoiced.

But now, look at the situation we’re in now. The problems are global. It’s not just migration, it’s a shift of populations, as we had at the end of the war.

There were displaced people all over the world whose homelands had been bombed to hell and were coming out of camps looking for somewhere to live and we solved it.

There’s ecological problems, environmental problems, there’s huge discrepancy between rich and poor worldwide, and that should worry us. Because that leads to extremity.

Surely, surely we can solve those problems better if we’re united than if we close ourselves down, shut our eyes, and hate the foreigners.’

If you liked that, you might also enjoy this video by Gordon Brown making a patriotic case for EU membership.