'Britain should be leading Europe, not leaving it' 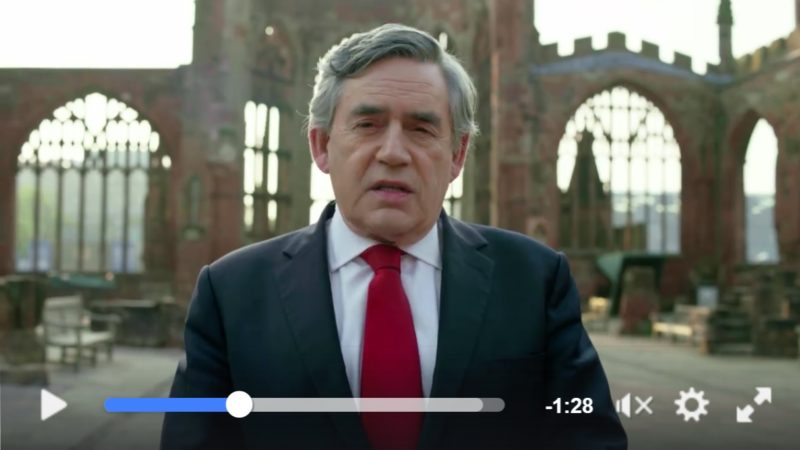 Gordon Brown has released a brilliant new video making an impassioned case for Britain remaining in the European Union after the June 23 referendum.

The video has been viewed 1.6 million times since it was launched on Saturday.

Walking through the ruins of Coventry Cathedral bombed during the Blitz, the former Labour prime minister evokes the long struggle to bring peace to Europe after two world wars.

He goes on to hail the EU as an institution that has meant ‘the only battle is the battle of ideas’, where disputes are settled by diplomacy based on shared interest – and the aspiration, if not always the commitment, to ‘democracy, human rights and the rule of law’.

The video is the best statement so far in this campaign of the internationalist case for Britain remaining in the EU, showing how there is some harmony between being a patriotic Brit and a patriotic European.

There is also an implied criticism of David Cameron’s arguments for remaining, as Brown says the EU is more than ‘simply a marketplace – it is a community’.

Here is the full transcript of the video. Feel free to share the video around, and tell us what you think in the comments below:

‘I’m walking through the ruins at Coventry Cathedral, bombed and destroyed by Nazi warplanes 70 years ago, and now painstakingly and lovingly maintained, as a monument to wars that we’ve left behind, and to the sanctuary of peace.

And just think of it. For a thousand years and more, the nations of Europe at war with each other – murdering and maiming each other.

A Europe where we fight with arguments and not with armaments. A Europe that is at peace because of What Britain did to establish freedom across the whole of the continent.

And we are the British people who have Europe the greatest statement of human rights, based on British values, driven forward by British experience, and now no country can enter the European Union without subscribing to these values.

And we are the British people who stood shoulder to shoulder with the peoples of eastern Europe when Soviet tanks rolled in said that they too were welcome into the European Union, if they subscribed to democracy, human rights and the rule of law.

And the Europe that we’re creating is not simply a marketplace. It is a community, where every single worker has rights to holiday pay, a maximum working week, so that the good employer cannot be undercut by the bad, and the bad by the worst in a race to the bottom.

Soon we will be the strongest economy in Europe. The stronger nations look to us for leadership.

And what message would we send to the rest of the world if we, the British people, the most internationally-minded of all, were to walk away from our nearest neighbours?

We should be leading in Europe, and not leaving it.’