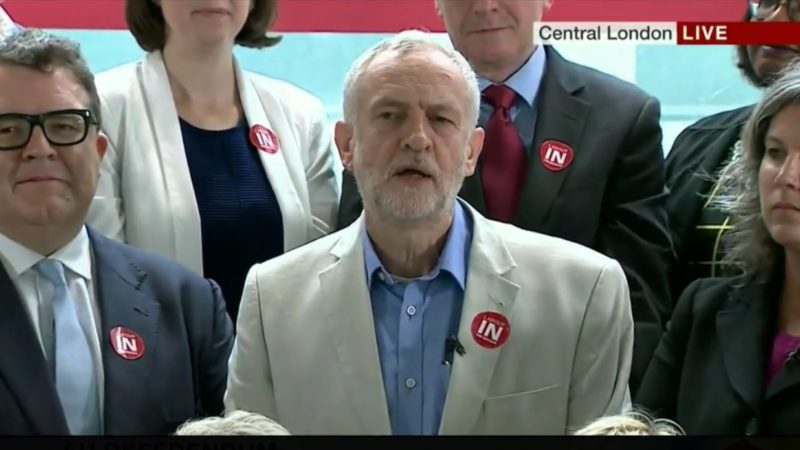 Jeremy Corbyn has brought the NHS to the fore of the EU Remain debate today, saying campaigners who claim leaving the EU would protect the NHS are ‘wolves in sheep’s clothing’.

In a keynote TUC address at Congress House, Corbyn said the chief Leave campaigners ‘don’t even want there to be an NHS’, and argued a Leave vote would put the NHS in jeopardy, due to the economic effects of Brexit.

The Labour leader claimed a Brexit vote would put the health service ‘in the hands of those who want to break it up to end it as a service free at the point of use’, referring to leading pro-Brexit figures such as Michael Gove, Boris Johnson and Nigel Farage.

Today the labour movement has come together to make the Labour case for Remain #LabourIn #EUrefhttps://t.co/qJTpnliTOF

Corbyn’s speech today attacked the Leave camp, saying those who are calling for a Leave vote would damage the health service:

‘Does anyone really believe that those from the hard right of the Tories and UKIP would spend any extra funds on the NHS?’

Responding to Left-targeted claims by Leave that the EU-US Transatlantic Trade and Investment Partnership would privatise the NHS, Corbyn said Labour would veto TTIP, and that many of those on the Leave side want to privatise the health service regardless of the trade treaty.

Corbyn said Leave’s claims about pumping millions more into the NHS post-Brexit ring hollow when Vote Leave have already said they’ll cut VAT on fuel and, this morning, that they’ll match all EU funding that currently goes to science, farming and culture.

Challenging the Leave side, Corbyn said:

‘Nigel Farage and Boris Johnson are wolves in sheep’s clothing, using their fake concern for the NHS to mask their real agenda.

If you care about the NHS, as I do, as Labour does, as NHS staff do, then vote Remain.’

He noted that every nurses’ and doctors’ union and royal college is backing a Remain vote, suggesting it is the best option for the health service:

‘The risk to the NHS if we vote Leave is the damage to public finances caused by a hit to our economy, and the risk to our NHS by a victory for those who would scrap a universal NHS – free at the point of use.’

The speech follows TUC General Secretary Frances O’Grady arguing in a speech this morning that Brexit would cost the public purse £30 billion per year – enough to fund the NHS for three months.

‘Key Leave campaigners support privatisation of our NHS and they’ve been consistently on the side of cuts.

Their pledge to spend more money on the NHS is nothing short of political opportunism.’