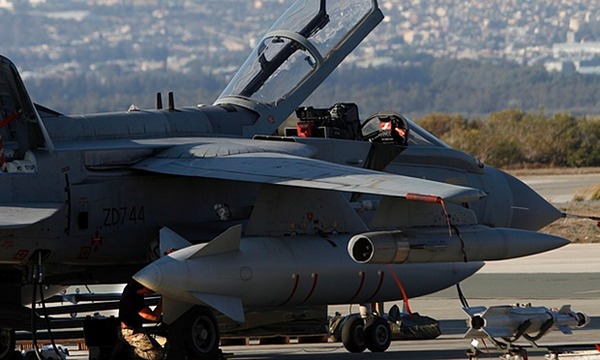 This morning the House of Commons Foreign Affairs Committee published a report recommending that the British government should not extend its airstrikes campaign against the Islamic State (ISIS) from Iraq to Syria.

The report makes little legal or military sense, but its political objection – that the government’s attempt to defeat ISIS independently of a resolution to the Syrian war is untenable – is exactly right. Unfortunately the report, while very vague, hints that a resolution involves cooperation with the Bashar al-Assad regime and Iran, which cannot work, and actually helps ISIS.

The Foreign Affairs Committee is agreed that destroying ISIS is a British interest, not least because of ISIS’s “destabilising effect in the region, and its ability to inspire deadly terrorist attacks elsewhere”, including inside Britain.

Britain currently has eight Tornados launching airstrikes against ISIS in Iraq and 800 troops engaged in a training mission in Iraqi Kurdistan. Britain has launched one airstrike in Syria, in August 2015, to kill the British ISIS member Reyaad Khan (that strike also killed another British ISIS jihadist, Ruhul Amin, and a U.S. strike around the same time killed Junaid Hussain, another Brit who was a senior ISIS recruiter).

The way the report is worded is to allow its witnesses to rehearse the arguments for extending British anti-ISIS airstrikes into Syria, and it largely lays out the arguments fairly.

In military terms, trying to destroy ISIS by only attacking it on the Iraqi side of the border makes no sense. ISIS has abolished the Iraq-Syria frontier, and ISIS’s most lucrative territory, its supply lines, and its main command structure are in Syria. British participation in the air campaign in Syria would be politically beneficial, with the United States and the regional Arab allies making the UK a full participant in the anti-ISIS Coalition.

On the other hand, there is no intention to increase UK military resources, merely to spread the modest current commitment even more thinly, which means the UK contribution will be largely symbolic. And without a reliable partner on the ground inside Syria to direct airstrikes and capitalize on them, their utility is somewhat limited.

But here the report gets to the first of some dubious assumptions, saying that there was nobody to work with because “all witnesses agreed that radical Islamist forces now dominate among [anti-regime] fighting groups”.

Unfortunately, this is hardly surprising. The report is composed from two evidence sessions, one on September 8 and one held jointly with the Defence Committee on October 8, which comprised fifteen witnesses. Among the witnesses were Patrick Cockburn, who is something less than hostile to Assad. And the report takes “note” of the views of the chair of the Defence Committee, the Tory MP Julian Lewis, as expressed in this article co-written with Peter Ford, a former UK ambassador to Syria who is openly pro-Assad, even complaining that Europe’s accommodating policy for Syrian refugees is helping them avoid the Assad regime’s conscription!

That the anti-Assad insurgency is composed of extremists is the key argument for those who want to side with the regime – as it was meant to be. The regime worked very hard to try to ensure that extremists came to dominate the insurgency to make self-fulfilling the argument that there was nobody to partner with except the regime against ISIS.

It is true that Islamists are now the majority of the insurgent forces in Syria, but this neglects that the nationalists were very powerful well into 2013; and more importantly neglects that the Free Syrian Army-style moderates remain the preference of the majority of Syrians, but have lacked sustained external support, as the regime and the Salafists have had, to be able to weaponize their support.

The report’s legal objections to extending the strikes into Syria serve to highlight how badly David Cameron’s government has handled the Syrian crisis and how problematic the concept of international law is.

Britain’s admittedly unwritten constitution provides for an Executive that takes action and then submits it to Parliament, as the report notes (“there is no legal requirement that the government seek Parliamentary approval for military action”). But after Cameron allowed Parliament to vote before the UK launched airstrikes against Assad for using chemical weapons in August 2013 – and Parliament blocked that action – this has now become the norm. The government has fashioned a rod for its own back.

In international law terms, unlike Iraq, where the government invited the UK to conduct airstrikes, Assad clearly will not invite the UK in. The UK can proceed under Article 51 of the United Nations Charter (the right of self-defence) but, the report says, the “most clear legal basis would be a United Nations Security Council resolution”, which is to say Britain should allow Russia and China the chance to block her foreign policy.

Worse, the report says that the Russian intervention on the side of Assad – and the coordinated increase in Iranian pro-Assad operations – should be taken as a de facto veto on UK military action. Russia’s action “appears to have dampened discussions about potential no-fly areas or safe zones”, the report says, and leaves it at that.

The dichotomy the report sets up – where military action would “compromise [Britain’s] diplomatic capability” – is silly. Force is part of political solution, not an alternative to it. To be able to “lead a renewed diplomatic initiative” Britain would have to have assets to bargain with.

Russia and Iran are creating facts on the ground, strengthening the regime by killing the moderates and trying to make the conflict binary so the only alternative to Assad is ISIS. No serious person can believe that Britain’s “diplomatic position and moral authority”, gained by the “provision of humanitarian assistance to Syrian refugees”, is sufficient to counter this, or to help stop the killing and help the refugees get back home.

Getting to the heart of its recommendations, the report says:

The focus on the extension of airstrikes against ISIL in Syria is a distraction from the much bigger and more important task of finding a resolution to the conflict in Syria and thereby removing one of the main facilitators of ISIL’s rise.

In one way this is perfectly true: a lasting solution to the Syrian crisis is needed to defeat ISIS. But it still makes absolutely no sense to be at war with ISIS only on the Iraqi side of the border; and where the report tips its hand as to how it believes the war should be ended it offers the one unworkable solution.

In the last paragraph of its conclusion, the report makes the astonishing assertion – again by letting its witnesses speak – that the Russian intervention has “opened up a new opportunity to bring parties to the negotiating table”, welcomes the inclusion of Iran in the discussions in Vienna, and disputes the notion relieving pressure on Assad to depart would help ISIS.

Iran’s central interest in Syria is keeping open the land-bridge to its proxy army in Lebanon, the jihadist terrorists of Hizballah, whose public involvement in Syria in the spring of 2013 triggered a massive wave of foreign volunteers to ISIS, and no force on earth helps ISIS recruit and entrench so much as Assad, against whom ISIS can claim to be the protector of Sunnis. To publicly decrease the pressure on Assad would increase the appearance – which is not wholly wrong – of the West aligning with Assad and Iran against “the Sunnis”, which helps ISIS all the more.

Britain’s policy has already been trending in a pro-Assad direction, and the news that Cameron has, with this report’s release, now dropped his plans to even hold the vote on extending strikes into Syria is a completion of that. It doesn’t change the fact, however, that the cynical “realist” idea of working with Assad as the “lesser evil” against ISIS is unworkable on its own terms since Assad doesn’t have the manpower and would spur ISIS’s recruitment to new heights. There is no Kurdish shortcut to this either.

ISIS operates in the Sunni Arab areas of Syria and Iraq and eventually a Sunni Arab force capable of policing its own local security, against ISIS and “official” institutions dominated by sectarian forces loyal to Iran, will have to be formed to defeat ISIS. It’s just a question of how many people have to die between now and then.