After Assad has burned down Syria and murdered 300,000 people, does he really get to arrange his own exit? 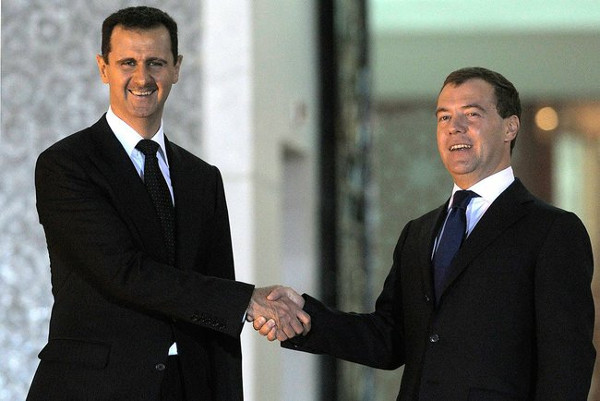 On 9 September the British government announced a new plan for dealing with Syria and the Islamic State (ISIS):

All three parts of this plan push in a pro-Iran direction, and strengthen Assad.

The US has already found that its extension of airstrikes into Syria, by focusing solely on ISIS and some other Salafi-jihadist anti-Assad insurgents, is being used by the regime and its Iranian-run security forces to perform an ‘economy of force‘: letting the US-led coalition attack ISIS in the east and focusing the Syrian air force on the nationalists in the west.

In this way, Assad/Iran hope to complete the destruction of the moderate rebels and present the world with the choice of the dictator or a terrorist takeover of Syria, confident the world will intervene to help put down the insurgency—which, let it be said, has effectively happened.

Supporting the Iraqi government sounds defensible, but the Iraqi security sector is still dominated not by conventional forces but the Shi’ite militias of al-Hashd al-Shabi. The militias that make up the backbone of the Hashd are proxy forces of Iran’s Quds Force, the expeditionary wing of the Islamic Revolutionary Guard Corp (IRGC), and some of them are designated terrorist groups who killed and wounded more than one-thousand American soldiers in Iraq over the last decade, and threaten to do so again if America moves against Assad.

The provision of airstrikes to Iranian-run terrorists against ISIS is not going to defeat ISIS because siding with Iran perpetuates ISIS. Strengthening Iran’s hand inside Iraq is also profoundly unhelpful at just the moment the Iraqi prime minister appears to be asserting himself against Quds commander Qassem Suleimani in an uphill struggle for Iraqi sovereignty.

It is, however, the softened stance on the timeline for Assad’s departure that shows how profoundly misguided is the British rethink. Incongruous as that might seem for Assad to be allowed to supervise his own transition out of power—after Assad has burned down Syria and murdered 300,000 people, does he really get to arrange his own exit?—it is much worse.

The British government has been outmanoeuvred by Russia into supporting a plan that extends the Assad dictatorship. Moscow promised its support in getting Assad out in exchange for the West relinquishing the demand that Assad go now. Britain has now conceded the principle that Assad will oversee the transition—ie.

Britain will cease all efforts to remove Assad before this transition—which means that all Russia and Iran have to do is prevent a transition from ever beginning; they have already made a start.

In just the last few days, it has been confirmed that Russian troops, some of them elite units involved in the theft of Crimea from Ukraine, are directly operating in Syria alongside Assad’s forces, and the Russians have been joined by ‘hundreds’ of Quds Force soldiers. These are not the actions of states preparing to cut their client adrift.

For many years now, the West has convinced itself that a change of Kremlin policy vis-à-vis Syria is imminent; this change never arrives. Worse, some now suggest this latest development could produce a fruitful new line of cooperation with Russia as part of the anti-ISIS coalition.

In truth, Russia could more easily contribute to the anti-ISIS struggle if it ceased to facilitate the travel of ISIS jihadists from the Caucasus to the Fertile Crescent—a cynical policy that has halved terrorist activity in Russia’s south since 2012 and buttressed the narrative of Assad, Iran, and Russia that Assad’s only opponents are Islamist terrorists.

With respect to Iran, the policy is altogether more erroneous. America is consolidating détente with Iran through the nuclear deal, which allows a draw-down of American resources in the region and hands Syria to Iran as a sphere of influence. The deeply mistaken notion of Iran as a partner against ISIS is the most visible aspect of this. The reality, of course, is that Iran and ISIS grow symbiotically; empowering one empowers the other.

David Cameron stated bluntly in announcing this policy: ‘Assad has to go’. To secure British interests—containing the growth of Iranian imperialism, destroying ISIS, alleviating the plight of Syria’s civilians, and stabilising the Middle East—this is indeed the necessary policy. A pity, then, that the actual policy does the opposite.