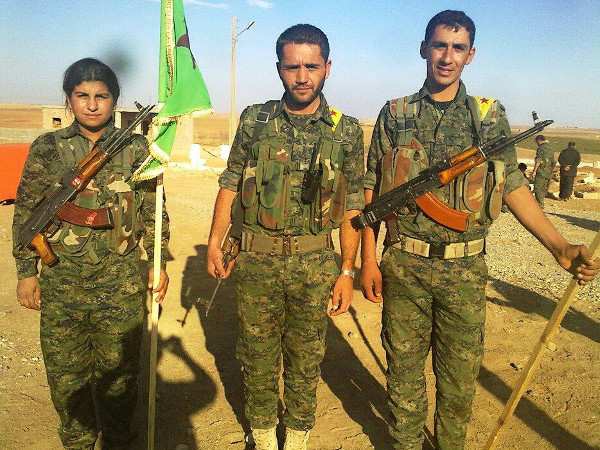 Yesterday, Caroline Lucas called for a diplomatic rather than military response to the attacks in Paris which left 129 dead and 352 injured on Friday night.

Using the well-worn aphorism that military intervention risks ‘making us less safe, not more’, her article advised against air strikes on Daesh (the newly-favoured name for ISIS due to its pejorative connotations), suggesting that they were directly related to the growth of their support base. In her solution, Russia and Iran are involved in the dealings.

After what happened in Paris, it’s easy to agree with Lucas. Nobody wants more terrorist attacks on Western soil. And public opinion, at least in 2013, was against intervention. (Though following these attacks, it stands to reason that those figures will have changed.)

The problem with Lucas’ approach is that with the breakdown of any acceptable opposition group such as the Free Syrian Army – which doesn’t even exist any more – the Kurds need, and deserve, our help. Despite the intervention of Turkey, the Kurds are still fighting against Daesh, and are the only group worth helping at this point.

Indeed, the US have been working with the People’s Protection Units, or the YPG, since October of last year, despite its alleged links to the Kurdistan Workers’ Party, or PKK.

The YPG is well worth fighting alongside whether you agree with their struggle for an ethnically Kurdish state or not, and is a significant force in the battle against Daesh: they have steadily been gaining territory along the Turkish border since they began working with the Americans.

And even though Turkey agreed to work with the Americans against Daesh, so far their operations have been largely restricted to bombing PKK-affiliated groups.

The other problem here is that in reality, Assad is morally equivalent to Daesh. He and his government are responsible for no less than forty-nine massacres – yes, massacres; considered ‘sectarian and ethnic cleansing’ massacres – in the period between March 2011 and June 2015.

Then there are the obvious crimes: his use of barrel bombs, the targeting of hospitals culminating in the deaths of 600 medical workers, and his alleged use of chemical weapons, to name three.

Working with him to tackle Daesh, then, may be the utilitarian solution, being marginally better for us in the West. But for Syrians? He was the reason they began protesting in the first place. This makes siding with Russia and Assad morally problematic, if not outright wrong. Surely Lucas would concur?

I do agree with Lucas that it is our civil liberties which mark our society as free, and that we must retain them. I also agree that we should not stop helping the refugees fleeing the very conflict we are having so much problem preventing.

The most important part of yesterday’s article, though, was towards its conclusion: the need for solidarity within Europe, and to prevent a surge in anti-Muslim rhetoric and action.

As she so rightly put it, we must not ‘undermine the multicultural communities in which we live.’ Unity is more important than ever, and it is what most have shown, from the communal rallies in London and Moscow to the Pray for Paris and Même Pas Peur hashtags circulating Twitter.

Yesterday in the Commons, David Cameron made it clear that he was going to push for backing for bombing militants in Syria, specifically in Raqqa, Daesh’s stronghold.

He spoke of the growing threat of Daesh, and said that we needed to take our nation’s security into our own hands. I don’t agree with most of what Cameron says, but I do agree with this.

It’s important that we work closely with the Kurds, especially after Masrour Barzani, the intelligence and security chief in Iraqi Kurdistan, called for ‘more engagement and more commitment’ in the fight against Daesh earlier today. They are our one reliable ally in Syria.

And it’s important that we don’t let terrorist attacks close to home deter us from doing what is right on foreign soil; if anything, they should just give us another reason to intervene.

35 Responses to “Response to Caroline Lucas: the Kurds need our help”