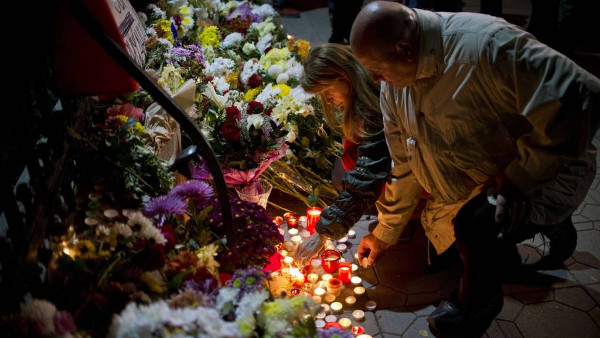 129 men and women went out on Friday night in Paris and never made it home. They were normal people: football fans, concert-goers and those out for dinner and drinks with friends. Many of them were young and the loss of each and every one of them is a scar upon a family that will never heal.

We must be absolutely clear about where the responsibility for this mass-murder lies: with those who perpetrated the deadly crimes, and those who assisted them. This was not an act of war by one state against another – and we must be careful about giving ISIS that kind of credibility – it was a heinous crime on an international scale.

An inevitable consequence of this kind of terror, whether it’s in Paris or Beirut, is that we all feel scared. Indeed that is the very aim of these attacks. It might seem that strong actions by the government – from cracking down on our civil liberties to raining down bombs on far away countries – will somehow give us comfort in the idea that at least something is being done.

Indeed over the weekend, as I read through report after report about Paris, I found myself searching for those simple, strong solutions. I’ve always championed our civil liberties and opposed military escalation, but this latest attack really did give me pause for thought.

But the truth is that both further militarisation, and ushering in an era of mass surveillance, risk making us less safe, not more.

ISIS likes to present itself as the true guardian of Islam under attack from the ‘crusader West’. This message, though dangerous and wrong, is reinforced by further Western attacks, which serve as effective recruiting sergeants for Isis as they seek to cement their power. As Paul Rogers notes, the sustained air assault of the last fifteen months, with close to 10,000 targets hit, has not pushed ISIS into retreat.

In the first eleven months of the air war, to July 2015, the US-led coalition killed 15,000 ISIS supporters. But according to US intelligence sources, there has been a surge in recruits to ISIS in spite of the air war and the losses. In September 2014, 15,000 recruits were reported to have joined from 80 countries; a year later the figure had risen to 30,000 from 100 countries.

Bombing people rarely kills their ideas – and we must be extremely cautious in accepting any march to war. The burning desire to act, to stop the terrorists and keep us all safe, must not result in an approach that ignores the evidence of our recent interventions in the region or their consequences.

A diplomatic solution to the crisis in Syria isn’t only possible, it’s critical. Following 15 years of militarism by the West in the Middle East – and after hundreds of thousands of deaths and with ISIS losing none of its strength – it’s critical that a new wave of diplomacy takes hold.

As a priority, our governments should be redoubling their efforts to push for diplomatic solutions to the crises in the Middle East. That means encouraging the Iraqi government to reach out to the country’s Sunni minority- in an attempt to cut off a key source of anger and frustration for Isis recruits.

And it also means getting major players – from Russia to Iran to Saudi Arabia – to build on the limited progress made in Vienna over the weekend. It’s also crucial that our government reassess short-sighted cutbacks to the foreign office and diplomatic services, whose work will be key in building and maintaining a lasting peace in Syria and the wider region.

We also need to make sure that any changes to the surveillance regime here at home are based on sound evidence – rather than being a knee-jerk reaction. The government’s Investigatory Powers Bill, which will place the broad mass surveillance powers revealed by Edward Snowden on a statutory footing, including mass interception, mass acquisition of communications data, mass hacking and retention of databases on huge swathes of the population.

But this kind of blanket approach may well be ineffective at fighting terror. As the Republican congressman Jim Sensenbrenner told the New Yorker earlier this year, ‘the bigger haystack makes it harder to find the needle’.

It’s worth noting that the government repeatedly refuses to come clean about exactly how useful the blanket retention of data is in averting terrorist attacks. When crimes are successfully prevented, we are not told whether communications data is central to the operation or a peripheral detail.

Nor are we told whether data leads to successful prosecutions or whether prosecution could have been secured without access to this data. And we are not told in how many low level, non-serious and even non-criminal investigations communications data is used.

We must also remember that it is our civil liberties – the right to a private life, the right to protest – which mark our society as free. Isis and their criminal allies will relish any crushing of the freedoms we enjoy here in Europe.

And while we protect our civil liberties and think very carefully before taking any military action it’s also vital that we are very clear about who is not responsible for this terror. The millions of people fleeing the butchery in Syria, most of whom are now languishing in refugee camps in neighbouring countries, must not be held collectively responsible for the actions of ideologues whose warped and violent repression they are attempting to escape.

We know that one of ISIS’ aims with this kind of attack is to divide us and whip up Islamophobia in Europe. That’s why it’s also crucial that don’t slip into the dangerous trap of laying the blame on the vast majority of people who follow Islam who don’t subscribe to the death cult of ISIS.

I know that many Muslims in Britain are feeling fearful of reprisal attacks – an already marginalised community at risk of further marginalisation. Cynical attempts to use these barbaric terror attacks to divide our communities are beneath contempt.  We must not play into the hands of the terrorists by using their attacks as justification to undermine the multicultural communities in which we live.

ISIS fear the strength of our solidarity. That’s why we need to do even more to work together – from our neighbourhoods when we support Muslims fearing attack to the international stage where we sit down with countries from across the world – to find a solution to this deadly crisis.