Despite Assad's best efforts, the conflict in Syria is not binary 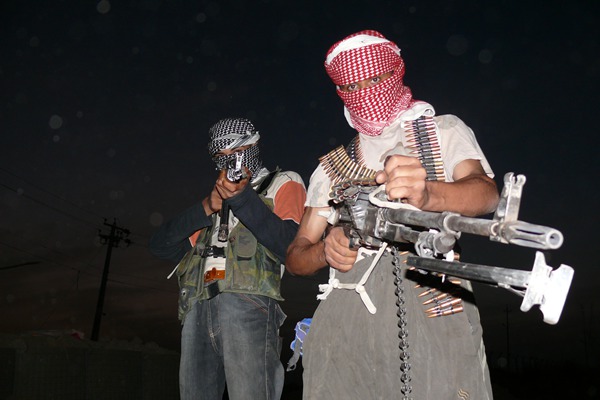 In the wake of the atrocity in Paris David Cameron has accelerated the push to extend British airstrikes against the Islamic State (ISIS) beyond Iraq into Syria. As Cameron put it:

“It is in Syria, in Raqqa, that [ISIS] has its headquarters and it is from Raqqa that some of the main threats against this country are planned and orchestrated. Raqqa, if you like, is the head of the snake.”

There is no doubt that this is so. The British government’s decision to war against ISIS – but only on the Iraqi side of an Iraq-Syria border that ISIS has abolished – makes no sense. This one-handed clapping is especially puzzling because ISIS’s most valued holdings are in Syria.

From revenue streams – namely oil fields and populations that can be taxed/extorted – to ideological legitimacy and recruitment tools, such as holding the town of Dabiq where ISIS prophesises End Times will take place, drawing in a large stream of foreign fighters, ISIS’s centre of gravity is in Syria.

Unfortunately, the disarray of the Labour Party under Jeremy Corbyn’s leadership is now hampering the fight against ISIS. In an interview Corbyn gave to the BBC earlier this week and in the remarks of Corbyn’s shadow home secretary Andy Burnham on Question Time on Thursday night, it is clear that the Labour Party is going to bind itself to the motion passed at the party conference which calls for a United Nations Security Council resolution to be passed before Labour would even consider supporting airstrikes against ISIS in Syria.

The Security Council, of course, is beholden to the veto of Russia and China. And Moscow – with its deep intervention in Syria on the side of the regime of Bashar al-Assad – will not sign-off on Western intervention in Syria, even when focussed on ISIS, lest it open the way to action against its client regime.

Corbyn declared himself unsupportive of airstrikes in Syria ‘at this stage’, and flatly refused to answer the question of whether he would, in principle, ever use force against Islamic extremists. Corbyn has since stated that Labour will not be allowed a free vote on the question of airstrikes against ISIS in Syria.

“We would have to consider it as a party,” Corbyn said. On the outcome of such considerations, Corbyn added: “I can’t predict at this stage.”

I, on the other hand, have a sneaking suspicion I can predict which way this will go.

Corbyn also managed to get himself into a secondary row by saying he was ‘not happy’ with shoot-to-kill orders against Islamist terrorists if an attack of the kind that happened in Paris was underway in Britain. To give such orders risked ‘end[ing] up with a war on the streets’, said Corbyn, which seemed to many to misplace who it was that was bringing war to the streets of European cities.

Corbyn and his spokesmen, while officially remaining agnostic, have hinted that their opposition to extending the airstrikes into Syria is because the government doesn’t have an integrated plan for what comes next – the ‘How does this end?’ fallacy, which almost invariably simply means: “I don’t want to do this.”

It is astonishing that the opposition should have no ideas of its own for how to handle one of the premier security threats to the country, and is instead waiting on the government to offer its proposal that they might critique.

The attempt by Corbyn to divert the question of what to do about ISIS into one about police cuts is also taking up valuable political space and time that might otherwise be used to prepare a multi-stage policy to defeat ISIS.

Extending airstrikes into Syria against ISIS is not a cure-all. Britain’s resources are indeed limited and will be stretched even further if she is operating in Iraq and Syria, since, as adumbrated in the recent Foreign Affairs Committee report, extra resources will not be deployed.

But increased freedom of action for Britain to target ISIS leaders and renegades like Reyaad Khan that pose a direct threat to national security, plus the political benefits of full participation in the anti-ISIS Coalition, is reason enough to support extending the airstrikes.

A ground component will be needed to defeat ISIS in Syria, and there are three broad options: the Assad regime, the Kurds, and the rebels and tribes.

The Assad regime’s crimes are not presented on high-resolution video as ISIS’s are but they dwarf in scale and intensity what ISIS has done: the systematic use of sexual violence, the burning alive of dozens of civilians, the torture to death of at least 11,000 prisoners in circumstances that put observers in mind of the Nazi Holocaust, indiscriminate barrel bombs and the targeted bombing of bakeries, marketplaces, and hospitals to ensure that rebels could never set up an attractive alternative administration (which the regime never did in areas held by ISIS), and the use of chemical weapons of mass destruction.

Apart from the help all of this has given ISIS in presenting itself as the defender of the Sunnis, it should make people think a thousand times before advocating alliance with Assad – not least for the sake of their own reputation.

The Kurds in Syria have proven skilled at defending their own areas, but projecting power into Arab-dominated areas where ISIS rules is deeply problematic, and it is for these reasons that even with Coalition air support the Kurds have only been able to drive ISIS from about one-third of a province in a year.

The rebels, by contrast, without Coalition support but rooted in, and with legitimacy from, the Sunni Arab populations over which ISIS is attempting to rule, expelled ISIS from nearly five provinces in six weeks at the beginning of 2014, and in the two provinces that the rebels completely cleared ISIS still has not returned.

And it is ultimately with the rebels, and the Sunni tribal forces, that an alliance has to be made to defeat ISIS. The only sustainable long-term solution to the ISIS problem is to empower local Sunni Arab actors to take control of their own security, offering an alternative to the communities currently ruled by ISIS’s statelet that does not involve sectarian domination by Assad or his Iranian-controlled armed forces.

Engaging with the (largely Sunni) Syrian rebels and the tribes does not come without risk, but a recent report from the Institute of the Study of War underlined that – despite Assad’s best efforts to make it so – the conflict in Syria is not binary, and the demise of the nationalist and moderate rebellion has been much overstated.

To enlist the Sunni rebels to defeat ISIS requires being committed to the removal of Bashar al-Assad, however, and on that David Cameron’s government has given cause for concern, which might yet undo his counter-ISIS strategy.

33 Responses to “Comment: The only sustainable solution to ISIS is to empower local Sunnis”