The Sun claims 'no sane person' can believe spending didn't cause the crash. These economists disagree. 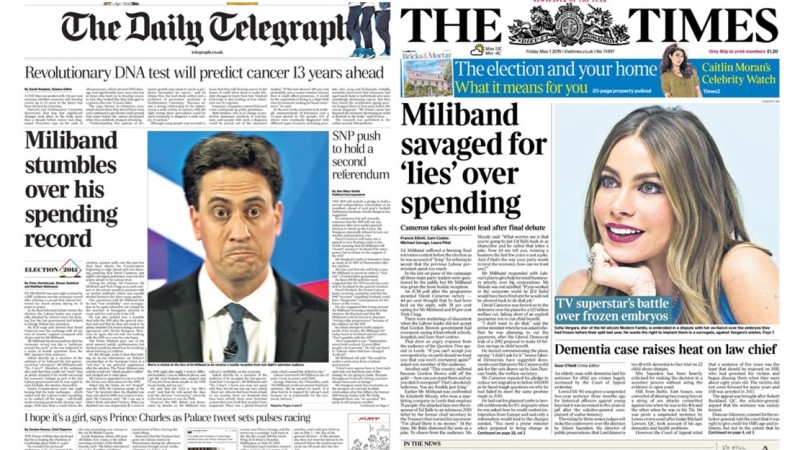 The papers are ablaze this morning with write-ups of last night’s BBC Question Time, where Labour leader Ed Miliband defended his party’s record on economics.

While the liberal Guardian and Independent papers lead with Miliband’s declaration he would sooner not be prime minister than forge a deal with the Scottish National Party, the Tory press has seized on his questions about public spending.

When asked by audience members if he agrees Labour spent to much money while in office, Miliband said he did not, repeating his argument that the financial crisis caused the rise in spending, not the other way around.

The audience, which the Tory press warned would be too left-wing before the broadcast, cut with the grain sown by the very same papers that praise them today, accusing Miliband of peddling a lie.

Always at the head of the pack, today’s Sun editorial says:

“To gasps and groans, the Labour leader insisted the Gordon Brown government in which he served played no part in the financial disaster which left the coalition with ‘no money’ in 2010.

It was all down to the grasping bankers and the global crash, he claimed. Not Labour’s overspending.

There cannot be a sane person who believes that.”

As it happens, Miliband does not clear Labour of responsibility. He has said repeatedly its failure to adequately regulate the banks led to the crisis.

But is it true that ‘no sane person’ can believe it was Labour’s spending that caused the crash?

“On the eve of the 2007-2008 financial crisis, public spending as a share of the economy was, at 39 per cent of GDP, close to the levels recorded during the latter years of Kenneth Clarke’s 1993-1997 chancellorship.”

Or what about Nobel prize-winning economist Paul Krugman? Writing in March in the New York Times, he said:

“Was the Labour government that ruled Britain before the crisis profligate? Nobody thought so at the time.

In 2007, government debt as a percentage of G.D.P. was close to its lowest level in a century (and well below the level in the United States), while the budget deficit was quite small.

This graph puts spending under the last Labour government into historical perspective (click to enlarge): 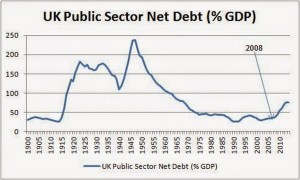 In fact, the pre-crisis deficit was lower under Labour than during the previous Tory government of John Major, as this graph shows: 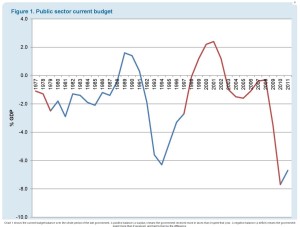 “We can see the surpluses in the early years of the Labour government, followed by the deficits around 2002/3. In the final years before the recession, we can see how policy tightened, so that just before the onset of the recession the deficit was very small.

This is hardly the story of a profligate government creating a crisis. Compare the tiny budget deficit in 2006/7 with the much larger deficits under the Conservative government in 1992-4.”

Of course, government debt as a percentage of GDP did rise under Labour, but after the financial crisis hit and tax receipts collapsed. As this graph shows, the spike in borrowing corresponds precisely with the sharp drop in GDP growth during the crash: 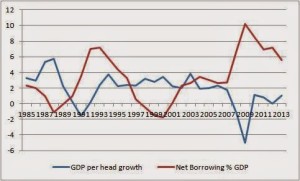 It’s a breakdown in the logic of cause and effect – as well as basic chronology – to say the rise in borrowing and spending after the crash was what caused it.

Writing in his excellent article ‘The Austerity Delusion‘ in Wednesday’s Guardian, (which includes a bruising critique of the current Labour party), Krugman called the idea that Labour’s fiscal irresponsibility caused the financial crisis ‘nonsensical’.

Wren-Lewis said blaming Labour’s spending and borrowing for the crisis is ‘economically illiterate’:

“the last government did not borrow excessively, whilst the recession was a consequence of overleveraged banks and the collapse of the US housing market.

The banks overextended themselves in poorly regulated financial markets, indulging in high-risk lending in the belief that a housing bubble would never burst.”

We’ve seen the Sun try to paint its political enemies as ‘insane’ before, writing on April 14 that anyone who thinks Miliband will run the economy more sensibly than Cameron shoold seek a psychiatrist.

Meanwhile, the current government’s record on the economy is a complete shambles, baring no relation to the rosy picture in the press, and has even seen (gasp) massive borrowing.

Sanity or insanity aside, no sensible person can take the Tory press seriously on economics as long as it continues to promote falsehoods on Labour spending and the financial crash.

39 Responses to “Tory press blasts Miliband on Labour spending and the crash. But he’s right”