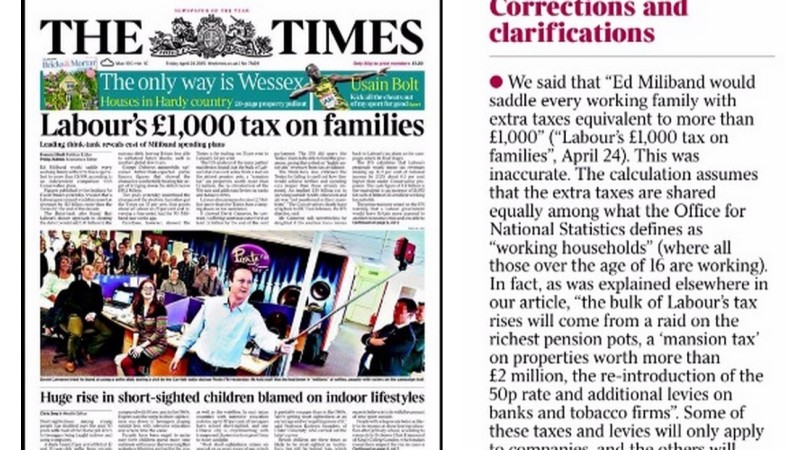 The Times newspaper on Friday, April 24, ran a front page story claiming a Labour government would mean £1000 more tax for ‘every working family’.

Today, just over a week later, the paper has admitted this was completely false.

The original story saw the headline ‘Labour’s £1000 tax on families’ plastered on the paper’s front page. It began:

“Ed Miliband would saddle every working family with extra taxes equivalent to more than £1000, according to an independent comparison with Conservative plans.”

This morning’s Times carries a mea culpa that says: “This was inaccurate.”

Here’s the correction in full:

“We said ‘Ed Miliband would saddle every working family with extra taxes equivalent to more than £1000’ (‘Labour’s £1000 tax on families’, April 24). This was inaccurate. The calculation assumes that the extra taxes are shared equally among what the Office for National Statistics defines as ‘working households’ (where all those over the age of 16 are working).

In fact, as we explained elsewhere in the article, ‘the bulk of Labour’s tax rises will come form a raid on the richest pension pots, a ‘mansion tax’ on properties worth more than £2 million, the re-introduction of the 50p rate and additional levies on banks and tobacco firms’. Some of these taxes and levies will only apply to companies, and the others will affect a small minority of families, not ‘every working family’ as we reported.” 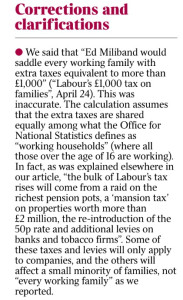 In other words, the story was total nonsense, and even contained its own correction when first published!

Labour’s tax plans, as laid out in the second quote, sound exactly like how Labour has described them – raising taxes on well-off pensioners, properties over £2million, top earners with the 50p rate and banks and tobacco companies.

The paper had no reason to claim ‘every working family’ would be ‘saddled’ with an extra £1000 in taxes.

The Institue for Fiscal Studies, on whose analysis the story was supposedly based, said no such thing.

Whether this was a mistake at the Times itself, or at Conservative party HQ, is unclear.

David Cameron met with anti-gay pastor who believes in witches