They scrapped tuition fees - but that's not quite the whole story 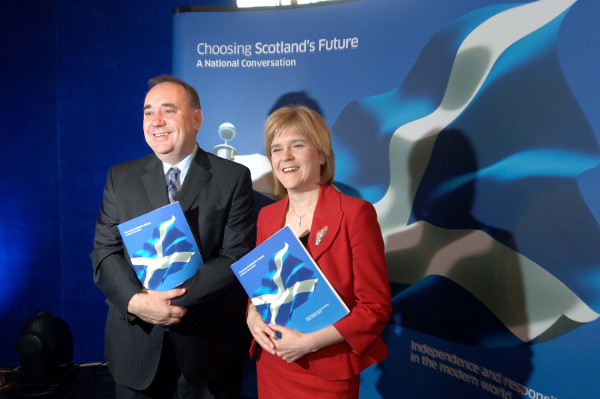 In recent weeks many have questioned the supposed progressive credentials of the ascendant SNP; they are, after all, a nationalist party. But close scrutiny of the SNP’s policies (and they don’t receive a lot of that in the English press) shows they are not as progressive, or as different, as they claim to be.

This is demonstrated today by John McDermott, who writes in the Financial Times about the false rhetoric surrounding the SNP’s flagship policy of scrapping tuition fees for Scottish students. He points out that in many cases the SNP’s 2007 promises – to meet annual loan repayments for existing debts, to re-introduce grants instead of loans and to scrap the graduate endowment fee – were not met.

What’s more, since then the SNP have presided over a system which favours the richest students and leaves the poorest borrowing the most.

McDermott cites research by former civil servant Lucy Hunter Blackburn which shows that Scotland now has the lowest rate of grant in Western Europe. Since the SNP took office in 2007, real-terms spending on income-related student grants in Scotland has almost halved, and as a consequence of this:

“Scotland is the only part of the UK where borrowing is highest among students from poorer backgrounds.”

More than 70 per cent of the poorest students –  those who are eligible for grants – borrow the full student loan amount available: £5,750 a year (£6,750 for mature students). Scottish degrees are four years long, meaning that on average these students are graduating with £23-27,000 of debt.

Below is a graph from Hunter-Blackburn’s research showing how students from lower-income backgrounds are more likely to take out loans. (Note that the ‘Applicants not declaring an income’ category is important as it contains a large proportion of those from higher-income backgrounds who did not submit for a means-tested loan): 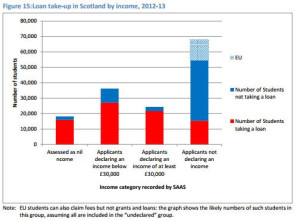 “As a politician now and able to sit here partly because of that free education, I have got no right to pull that ladder of opportunity up behind me.”

But it is clear that tuition fees are only one part of the student finance picture. And that picture, as McDermott points out, “looks very much like the Scottish government has chosen to prioritise investment towards richer students rather than those from poorer backgrounds.”

It’s also important to note that, in isolation, tuition fees do not appear to be particularly discriminatory toward poorer students. The Independent Commission on Fees, established to assess the impact of the fee hike put in place by the coalition, found that “there does not appear to have been any disproportionate drop-off in applications from poorer or less advantaged communities.”

The research found that other indicators had more of an impact on the likelihood of entering higher education after the increase in fees: applications from mature students, for example, fell by 14 per cent, and the gender gap among working class students widened, with a 5.9 per cent decline for girls and a 7.5 per cent decline for boys between 2011 and 2014.

The ICF said that the gender gap reflected “concerns expressed elsewhere about the educational under-performance of working-class boys”. In other words, unfair university access stems from problems of social mobility that are more deeply rooted than tuition fees.

But the SNP should not let themselves off the hook so easily. It is futile of Nicola Sturgeon to continue to talk as though abolishing tuition fees alone can open up the door to a wider student demographic, whilst operating an ungenerous grant policy towards poorer students which will saddle them with unmanageable debts for years after they graduate.

19 Responses to “Progressive? How the poorest students suffer from the SNP’s student loans policy”