Black, Indian, Chinese, gay, mixed race – all fought for a country at a time when it treated them as second-class citizens. 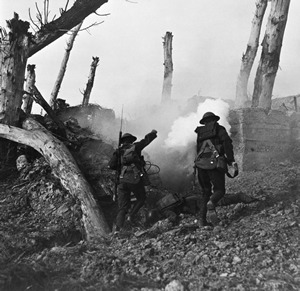 Black, Indian, Chinese, gay, mixed race – all fought for a country at a time when it treated them as second-class citizens

Across both World Wars soldiers and civilians of all colours, creeds and sexualities served Britain. As we commemorate the centenary of the Great War, it’s time to highlight the shared sacrifice of those from across the Empire. We must rethink our image of those that served and died.

The image of the British Tommy in the trench is an iconic one, but it only tells a part of the story. The troops that fought for Britain 100 years ago in many ways reflect the country we have today – many of their descendants live amongst us.

Remembering the diversity of those who fought and died is not just good history; it acknowledges untold sacrifice and gives the place in our island’s history that these groups have been denied by omission.

The scale of their service was only eclipsed by the Indian contribution to the Second World War: 2.5 million men (amongst them Hindus, Muslims and Sikhs) made up the largest volunteer army in the history of the world, fighting for the UK in its hour of need.

16,000 ‘Black Britishers’ from the West Indies volunteered to fight for Britain despite facing discrimination in Europe. Men like Lieutenant Commander Walter Tull, British born of Afro-Caribbean origin, fought and died for their country.

Indeed, many non-white soldiers were from the UK itself. England’s black community long predates the First World War and the high rates of intermarriage means that many descendants of the first Black Britons may never know of their mixed origins.

The huge military sacrifice aside, Britain could not have endured either World War without donations like the £2 milion raised in the West Indies, or the work of everyday people across the Empire who paid their taxes, and contributed directly and indirectly to the war effort. From food to munitions, Britain could not have survived alone.

Second World War heroes like Flight Lieutenant Ian Gleed fought for a country that criminalised his sexuality while Alan Turing cracked the codes that helped us win against Hitler. Wilfred Owen was not the only gay man in the trenches and we need to acknowledge the gay contribution to Britain’s survival in both wars.

Black, Indian, Chinese, gay, mixed race – all of these groups fought for a country at a time when it treated them as second-class citizens, yet they served nonetheless. When the first wave of Commonwealth immigrants arrived almost all were from families that in some way had helped ensure Britain’s survival – making organisations like the National Front trying to hijack Remembrance Sunday all the more perverse.

From the Indians recovering at the Royal Pavilion to the West Indian troops stationed in Seaford who took part in civic events – relationships were built that have subsequently been forgotten.

Racism and homophobia flourish if history is only seen through one particular prism. The iconic image of the white British Tommy was a reality and we shouldn’t try and replace him – but alongside him stood men of different races and men who loved men – all of them serving and sacrificing. Their stories deserve to be told too.

This is black history, it is gay history but it is also British history. The stories of the men from across the Empire, the mixed race man from Kent, the gay men in the trenches don’t belong to just one group – they are part of our shared history and should be told.

10 Responses to “The image of the British Tommy is an iconic one, but doesn’t tell the full story”